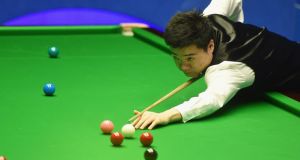 Ding Junhui of China in action during his match against John Higgins at the World Snooker Championship in Sheffield. Photo: Michael Regan/Getty Images

John Higgins saw his hopes of a fifth world title ended for this year as Ding Junhui advanced to the quarter-finals in Sheffield.

The 28-year-old Chinese cueman has based himself in Sheffield for the last decade but cruelly the Crucible has been a bogey venue, with his best performance to date a run to the 2011 semi-finals, where Trump edged him out.

Last season Ding won a record-equalling five ranking titles to extend his career haul to 11, but this has been a barren campaign for the leading light of Asian snooker, meaning expectations of him were tempered heading into this tournament.

Victory over Higgins changes that. The 39-year-old Scot had looked sharp in his opening win over Rob Milkins, and recently picked up the Welsh Open title to end a two-and-a-half-year dry run.

But instead Ding struck back, and he led 9-7 heading into the Saturday morning final session, nudging closer to the winning line with breaks of 63 and 89.

Higgins held up Ding’s triumph by pinching a tight frame to close to 12-9, but he missed a key brown in the next, when trailing by 28 points.

That put Ding in control of his destiny. When Ding dropped in the penultimate red, he held a 44-point cushion, with 35 left on the table.

Misfortune struck as Ding glided off the last red when escaping from a snooker and the white fell into the yellow pocket. Higgins had a free ball, with the red hidden by the brown, and Higgins knew he would close to 12-10 should he clear the table.

But he missed a testing pink off the remaining red and was soon shaking hands, Ding through to the quarter-finals for just the third time in his career.

Meanwhile, Mark Selby tipped his shock conqueror Anthony McGill to carry off the World Championship title after the Crucible curse struck yet again.

Scottish potter McGill, a qualifier making his debut on snooker’s biggest stage this year, followed up his eye-catching 10-9 win over fellow Glaswegian Stephen Maguire by crushing Selby’s hopes of retaining the trophy.

He was rated a 150-1 shot for the title with bookmakers before the tournament began. But in clinching a 13-9 victory over Selby to reach the quarter-finals on Friday night, McGill never appeared overawed by the occasion or the gradual position of control he developed.

The 24-year-old finished off Selby with a break of 82, and as they shook hands, the man who beat Ronnie O’Sullivan in last year’s final told McGill he could go all the way.

Selby said: “He played fantastically all match and thoroughly deserved to win. Every time he got a chance he seemed to punish me.

“I said to him at the end that if he played like that there’s no reason he can’t win it.”

McGill said: “I’m just ecstatic. To beat the world champion at the Crucible, I just can’t believe it.

“No-one expected me to win. I wasn’t expecting myself to win, I was just hoping to put up a decent fight and try my best. To beat Mark 13-9 is just a dream.”

No first-time winner of the World Championship in Sheffield has returned a year later to retain the trophy, with Selby becoming the 16th to falter, joining a list that includes greats of the game such as Steve Davis, Stephen Hendry and O’Sullivan.

It has become known as the Crucible curse, but with that in mind Selby said: “I’ve no embarrassment in losing. You look at the greats who’ve won it for the first time and not defended it.”

McGill faces a last-eight clash with Shaun Murphy or Joe Perry, who begin their second-round clash on Sunday.

As for his own thoughts of landing the trophy, McGill said: “I’ve knocked out the world champion, so you think whoever knocks him out could . . . but I don’t know.

“I don’t think people will be fearing me. I’m probably a good draw in the quarter-finals of the World Championship to be honest.

“It seems like every time I win a game it’s the biggest win of my career. Fingers crossed it keeps happening.”

Hendry gave a thumbs-up as they briefly crossed paths, the approval of the seven-time champion bringing a smile to McGill’s face.