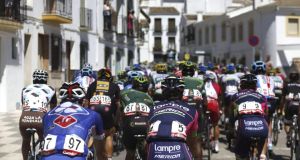 The pack competes in the fifth stage of the 69th edition of the Vuelta a Espana . The fifth stage is 183.3 km long and goes from Riego de Cordoba to Ronda. Photograph: Javier Lizon / EPA

Giant-Shimano’s John Degenkolb won his second straight stage of the Vuelta a Espana ahead of a frustrated Nacer Bouhanni in Rondo on Wednesday while some smart thinking saw Chris Froome pull back a couple of seconds in the general classification battle.

Ireland’s Dan Martin was fifth yesterday and second on Monday, but finished 40th today, five seconds adrift of Degenkolb. Nevertheless, he moved up to 19th in the overall rankings, 48 seconds behind the German.

Martin, in fact, has been promoted to team leader after a bad day for Garmin-Sharp on the only categorised climb of the day.

On the category three Puerto el Saltillo, as the pace stepped up and crosswinds blew, there was a split in the pack. Garmin-Sharp were among those to get caught, costing Andrew Talansky and Ryder Hesjedal almost four minutes and leaving Martin as the only one who managed to stay with the main pack.

Although there was a lumpy finish to the 180km stage from Priego de Cordoba, it flattened out in time for the sprint teams to move into position after Team Sky and Alberto Contador’s Tinkoff-Saxo had led the peloton towards Rondo.

Degenkolb hit the front first as the line approached, and Bouhanni’s (FDJ) attempts to catch him appeared to be hampered by the crowd’s thunder sticks as he tried to ride along the barriers on the slight incline to the line.

The bunch finish saw Michael Matthews retain the leader’s red jersey, 13 seconds ahead of Movistar’s Nairo Quintana after picking up a little time thanks to a late split.

Froome is 38 seconds back overall, having picked up a couple off Quintana when some quick thinking saw him burst out of the pack to nab some bonus time on the day’s intermediate sprint.

With Matthews in red, Degenkolb had been nursing the points leaders’ green jersey on this stage but now holds it outright after Matthews failed to feature in the sprint.

The stage began with a two-man break featuring Omega Pharma-Quick Step’s time-trialling star Tony Martin and Lotto Belisol’s Pim Ligthart, and they built an advantage of more than three minutes in the early going. With the peloton taking it steady on another sweltering day, Martin might have had the engine to keep the break clear, but when he suffered a mechanical problem and dropped back into the pack, Ligthart was left on a doomed mission.

The Dutchman would cross the intermediate sprint in Campillos first before Froome made his move behind to snare two seconds which could prove very useful down the line.