Dan Martin’s Diary: Days 14 and 15 ‘My brain felt like it was being cooked’

I am just over four minutes back from second place. I think anything can happen still 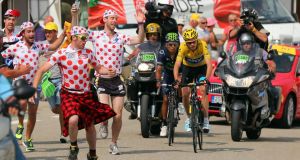 Fans run alongside Nairo Quintana of Colombia and Chris Froome of Britain during stage 15 of the Tour de France, from Givors to Mont Ventoux. Photograph: Bryn Lennon/Getty Images

Saturday, Stage 14: St Pourçain sur Sioule to Lyon (191km):
Saturday was a day when a very big group fought it out between them for the stage win, but for those of us in the bunch it ended up being a pretty hard race all the same.

Things were all going to plan at the start, a three- or four-man break went away and the bunch tried to block the road to stop others trying to get across. However, the roads were too big and guys just kept attacking and attacking.

I think we averaged 48km per hour for the first two hours. It was nuts. And it wasn’t a flat road – there were definitely some decent climbs in there, with the route also very technical through villages and stuff. It required a lot of concentration and wasn’t as easy at might have seemed.

The break eventually got clear, but then the Lampre and Euskaltel teams started chasing for a long time. They eventually blew but not before causing the bunch to hurtle along at 50km per hour for an hour or so. The day was a lot more draining than expected.

There were two Garmin-Sharp riders in the move, David Millar and Andrew Talansky. David was hunting for the stage win but that didn’t work out; Andrew was more successful in his goal of moving back up the general classification, gaining over seven minutes and jumping to 12th overall, just behind me. He is also in contention again for best young rider, so it was a good day for him.
Sunday, July 14th, stage 15: Givors to Mont Ventoux (242.5 km):

Mont Ventoux, one of the most famous climbs of the Tour de France, was the day’s big climb but before then, we had a very long, hard day in the saddle on undulating roads.

Break went
Early on a break went, then the French rider Pierre Rolland attacked when the bunch was stopped for a nature break, trying to get up to the move and take more points for the King of the Mountains competition.

He was unable to get across, then his Europcar team decided to chase the breakaway down.

It made for a crazy day. I don’t think I have ever had such a fast, hard day’s racing. I think we had a 46km per hour average by the bottom of the Ventoux.

It being Bastille Day was probably part of that, as the French teams and riders were really fired up.

Initially, despite the racing being done at warp speed, I felt really good, my legs were great.

However, after four hours I really started to suffer with the heat. My brain felt like it was being cooked, like being boiled alive.

It meant I didn’t feel good at all at the bottom of the Ventoux. I managed to push through it and felt a bit better higher up when it cooled down, but I was a bit disappointed to slip back when I did, 9km to go.

If I had held on to the yellow jersey group for another 200 metres, I would have stayed in the same group as the Belkin riders Bauke Mollema and Laurens Ten Dam to the finish.

I ended up riding 15 seconds behind them the whole way up, then half-blew with 2km to go in the headwind.

They took a bit more time out of me, finishing 43 seconds ahead; I ended up 14th on the stage, and 11th overall.

Top 10
Given I am just 30 seconds behind the 10th-placed rider, Michal Kwiatkowski (Omega Pharma-Quick Step), if I had stayed in that group I’d be in the top 10 now.

Anyway, aside from the race leader Chris Froome, the general classification is very close at the moment. I am just over four minutes back from second place. I think anything can happen still, even though I believe Froome may have the race for first locked up.

We now have a rest day today, which I am looking forward too. The only thing is we are sharing the hotel with Team Sky, and so I think there will be a bit of a media frenzy.

I know a lot of the riders on the team well so it’ll be good to be around them, but the hotel lobby is going to be a heck of a lot busier than if we were on our own!

Glancing at the stages ahead, there is a lot of climbing left in the Alps. I’m looking forward to those – I think the days with multiple climbs suit me much better than a stage like the Ventoux, where there was just one big mountain and it was an explosive effort.

The way my body works is I am a lot more efficient on the climbs than most riders, so when it is up and down all day, it works out well for me.

There are a few days like that to come, and so I am really excited about this final week of racing.

I feel fresh and mentally, I feel very fresh too – not a lot of guys can say that at this point.