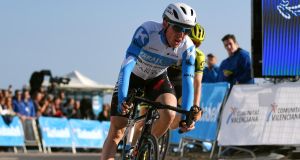 Dan Martin finished second on the fourth stage in Portgual.

Dan Martin went agonisingly close to notching up his first victory of 2020 on Saturday, finishing second at the top of the Malhão climb at the Volta al Algarve in Portugal. The Irish climber was the only one able to get close to the Colombian Miguel Angel Lopez (Astana Pro Team) when he attacked inside the final kilometre of the fourth stage, but was unable to reel him in before the line.

He finished two seconds back, with overall leader Remco Evenepoel (Deceuninck-QuickStep) a further two seconds behind in third place.

“Of course it’s frustrating to come so close but I have to be happy,” Martin said. “I did everything right in the final but López was just stronger. I thought I might be able to come back at him but in the end he was just too strong.

“The team did a fantastic job all day, and I stayed relaxed and in good position . It was a great team performance and I’m just happy I was able to get a result for them.”

Evenepoel continues to lead overall but Martin has moved from third to second overall. He is level on time with the Belgian but with Sunday’s final stage an individual time trial, Evenepoel is the clear favourite to take the overall classification. He was the silver medallist in last year’s world time trial championships, while Martin is not a time trial specialist.

Still, his second and third places on the race’s two summit finishes plus his strong showing overall suggest his debut win of the season is not far away.

The time trial should suit Irish TT champion Ryan Mullen (Trek-Segafredo), who should fare well on the course in and around Lagoa.

In France, Nicolas Roche had another impressive showing in the Tour Cycliste International du Var et des Alpes Maritimes. He finished with the leading contenders on Friday’s opening stage, despite not racing for many months, and was then a fine sixth on Saturday’s second stage. The race up the Col d’Eze climb was won by past Tour de France runner-up Nairo Quintana (Team Arkea-Samsic), who finished 40 seconds clear of a 22 man chase group. Roche was part of this pursuing bunch.

“I was really motivated for today’s stage as these are one hundred percent my training roads,” he said. “So it was good to get a result on the mountain-top finish just ten kilometres from my home.”

Quintana now leads overall, with Roche 12th. The Irish Team Sunweb rider is 40 seconds back heading into Sunday’s concluding stage to the top of Mont Faron.