Cycling column: Irish riders in action as season ramps up 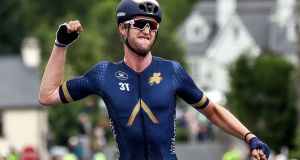 Conor Dunne: he has spent much of his career working for others, but stepped things up last year when he took the national title with a superb breakaway effort. Photograph: Bryan Keane/Inpho

With the competitive year ramping up, Irish riders have got their season underway in various events.

National champion Conor Dunne showed strongly this week when he finished a solid 11th in Tuesday’s 12km time trial at the Vuelta a San Juan in Argentina. The performance elevated him in the general classification, and he went into the fifth stage late on Thursday in 16th place overall, one minute and one second behind the race leader Julian Alaphilippe (Deceuninck-Quick Step).

Dunne has spent much of his career working for others, but stepped things up last year when he took the national title with a superb breakaway effort. He is now with the Israel Cycling Academy team, and will make the most of any opportunities given to him by the Pro Continental team.

Also riding well is Sam Bennett, who was third on the opening stage despite being out of position when the sprint started.

Dunne had been with the Irish Aqua Blue Sport team last season. It fell apart at the end of August, potentially leaving Ireland without a UCI-registered team in the international peloton. The new EVO Pro setup filled the gap, albeit at Continental rather than Pro Continental level, and has been faring well thus far.

Last Sunday Kiwi rider Aaron Gate triumphed in the New Zealand Cycle Classic, a 2.2-ranked event which forms part of the UCI’s Oceania Tour. He took the opening stage of the race last Wednesday and then defended the overall lead through to Sunday’s finale, netting stage placings of tenth, second, third and seventh along the way.

Since then the squad has been in action in the Herald Sun Tour, netting third with the Dutchman Wouter Wippert on Wednesday. On Thursday Australian Cyrus Monk secured the most aggressive rider award due to his performance in the day’s breakaway; it was hauled back before the line but his ride nevertheless impressed.

Meanwhile in Europe some of the team’s Irish riders have begun their own seasons. Daire Feeley was best of those in Thursday’s opening day of the Challenge Mallorca, the Trofeo Ses Salines-Felanitx. He placed 80th, while Irish teammates Aaron Kearney and Cormac McGeough were 132nd and 146th. Two other riders, Mark Downey and Rory Townsend (Canyon dhb/Bloor Homes), were non-finishers.

Racing continues Friday with the Trofeo Andratx-Lloseta, also in Mallorca. The Challenge Mallorca event consists of four one-day races. Dan Martin (UAE Team Emirates) is due to make his season debut there, although he didn’t ride Thursday’s contest.