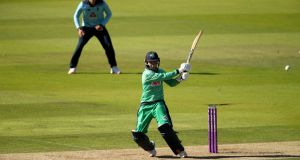 Ireland were well on the way to embarrassing themselves – scoreboards don’t read much uglier than the 28-5 Andy Balbirnie’s side were reduced to after just 6.3 overs. But it was then, walking out on international debut to face the music of David Willey’s hat-trick ball, when Curtis Campher determined otherwise. Yes, the world champions went on to take the first one-dayer comfortably, winning by six wickets, but the new man’s unbeaten 59 saved visitor’s blushes by pushing them to 174, later taking a wicket within four deliveries of his introduction to leave the hosts 78-4 with work still to do. It was quite the first impression.

Doubly so when considering how Campher bolted into the side: not only has he never played a game in Ireland but, until eight weeks ago, he was stuck in his native South Africa due to Covid-19. With the bat, the 21-year-old displayed all the poise the top order lacked in the opening exchanges after they were inserted on a perfect summer afternoon. For the sixth wicket, alongside mainstay Kevin O’Brien, he added 51, and when his senior partner fell – and Simi Singh ran himself out moments later – he put on a further 68 for the eighth wicket with Andy McBrine, who slapped 40. There was nothing flashy about the new man’s work, accumulating carefully until the final wicket fell in the 45th over, but it was essential.

“It was an old-school knock but exactly what we needed for someone to occupy the crease and adapt to the conditions which us top five batters weren’t able to do,” Balbirnie said of his new all-rounder. “It was as good a debut as I’ve seen in an Irish shirt in the last number of years and is a huge positive to say he is only 21 and hopefully he can get better.”

It was a considerable gamble for Campher to leave the South African national pathway so early in his career, representing the Proteas just two years ago at under-19 level. But armed with a burgundy passport, courtesy of a grandmother who was born in Ireland, he backed himself with confidence that is apparent both through his cricket and words. With the brain’s trust moving into the future with a decidedly younger team – this was the first time four players under the age of 25 have turned out since 2016; also the only ODI former captain William Porterfield has missed since 2014 – his timing is perfect.

Just as it was when Campher was brought into the attack for the 14th over, immediately rushing England wunderkind Tom Banton with extra pace, finding his top edge. For a brief moment, it was game on for a team with a reputation of killing giants. However, it was then Eoin Morgan – another man who knows all about changing cricketing allegiance – who calmed the situation for the hosts, the England captain joining top-scorer Sam Billings (64 not out) for an unbeaten 94-run stand, winning the game with 22.1 overs in hand via a straight six.

Positive as Campher’s introduction was, Ireland’s early collapse was an abrupt reminder of how tricky this transition period might be. Paul Stirling was the first of Willey’s five wickets, chipping to Morgan in the first over, before Balbirnie was his second, edging behind. Harry Tector, also making his bow, chopped on before scoring then Gareth Delany carved the left-armer to backward point. Lorcan Tucker was the fifth in the sequence, trapped first ball.

Craig Young, picked ahead of Boyd Rankin, bowled with accuracy and movement with the new ball, good enough to dismiss Jason Roy leg before and nick off James Vince in the power play. He had to stand up after Barry McKenzie hit the deck in the first over of Ireland’s defence, injuring an ankle. Between times, Andy McBrine deployed an excellent DRS referral to see the back of Jonny Bairstow. But for all that good work later on, as Balbirnie put it, “competing with a team like England, 170 just isn’t going to be enough.”

The three-game series, all to be played behind closed doors at the biosecure Ageas Bowl, continues on Saturday afternoon before concluding next Tuesday.