Cook intends to stay on as England captain despite Ashes whitewash 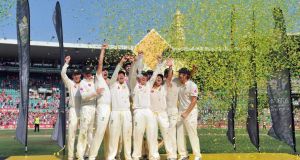 The Australian team celebrate their victory with the Ashes urn after defeating England in the fifth and final Test at the SCG in Sydney. Photograph: Paul Miller/EPA

England may have surrendered once again in Sydney, producing another wretched batting performance on the third day of the fifth Test as Australia completed just the third 5-0 whitewash in Ashes history, but even in bitter defeat Alastair Cook has again committed himself to staying on as England captain.

The tourists arguably plumbed new depths in an already embarrassing campaign as they collapsed yet again, in notional pursuit of a world-record 448 to win, to 166 all out. Ryan Harris took five for 25, and Mitchell Johnson (three for 40) finished his outstanding series with 37 wickets as England lost by 281 runs.

If there was some low comedy in the revelation at Cook’s post-match press conference that the only message of support he has so far received from his employers came from a story on the ECB website that appeared on his smartphone on Sunday morning, then even in the wake of a 281-run defeat in Sydney it still seems likely that his desire to stay will be rewarded.

“I’m desperate to try to turn it round,” Cook said. “ I feel I’m the right man for the job to do it. If I’m not, and people higher up want a change because they think that’s the best way, then I’ll have to take it on the chin. But in the dressing room, I feel as if I’m the right man to do it.”

If Cook seems to be suffering a chronic case of competitive fatigue ahead of England’s one-day series, which starts next week, there was at least a flash of characteristically restrained fury in his response to his team’s humiliation here.

“There is anger in me and frustration, because for whatever reason we haven’t played very well, and the buck stops with me on that front. That’s why it hurts so much. I suppose that’s sport, isn’t it?”

Asked what qualities he has to help revive this England team Cook referred to his experience of England’s last whitewash series in 2006-07.

“I have a lot of experience as a player. I’ve seen a 5-0 before. And I’ve seen the drive and determination that that caused in the England team in a certain number of players. I know what that takes to do. So when you strip everything down, every single player needs to go away and have a look at themselves, have a look at their techniques, have a look at the way they bowl, and you start rebuilding again, and that real hunger and desire has to come from within to do it.”

If loyalty to his line managers counts for anything then Cook remains an entirely steadfast lieutenant, defending even in the aftermath of the whitewash what has looked with every defeat an increasingly lopsided Ashes tour party.

“I wouldn’t have argued too much with the squad we picked – certainly not at the time,” he said. “In terms of moving forward, we’ve seen some very good stuff from Ben Stokes. He looks like he can balance our side – something we’ve been crying out for for some time. I think he’s been the find of the tour. What it does mean when you lose 5-0 is that a lot of places are up for grabs again. That should be a real inspiration for people outside the team, but also for people inside the team.”

Cook confirmed that his first significant act in defeat would be to go and have a drink with the victorious Australian team in their dressing room, a necessary balm after an occasionally rancourous series. After which he will be required in the next few days to engage in some serious short- and medium-term planning with the assorted ECB management layers currently gathered in Sydney. Cook at least is convinced that Andy Flower is the right man to recondition this England team.

“There will be some conversations along those lines, we’ll have to sit down and discuss it,” he said. “I hope Andy is with us, I really do. His record suggests he is a fantastic coach, he is a great man and his heart is in it to turn it round. I hope it is me and him that do it.”

There have been some – albeit rather spurious – suggestions that England’s captain might have considered his own position during this series, but Cook was adamant he has never been close to resigning

“If I feel my position in the side is not justified for the amount of runs I score and I don’t feel I’m the right man for the job then I’ll resign,” he said. “I’m very proud to be England captain, I think it is a huge honour and is not something I take for granted by any stretch of the imagination and I’m desperate to help England turn it round.”