Conor McGregor appears in a press conference ahead of his rematch with Nate Diaz at UFC 200. Video: UFC 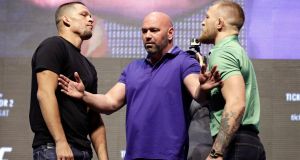 If Conor McGregor is to get a crack at the UFC lightweight title any time soon - it won’t be against Rafael dos Anjos. The Brazilian was beaten by Eddie Alvarez at UFC Fight Night 90 on Thursday night.

The man who was due to fight McGregor for the belt at UFC 196, before a foot injury ruled him out, was beaten via TKO at the 3:49 mark of the first round.

After the victory though, the former Bellator champion Alvarez was quick to tee up a fight that would certainly interest the Irish man. Who has made no secret of his desire to become a dual (featherweight and lightweight) champion.

“I would ask Dana White please to give me an easier fight like Conor McGregor,” Alvarez told reporters. “I deserve that. I’ve been fighting the best guys. I would like a gimme fight. So, Conor? I more than welcome that.”

Before any of that enters McGregor’s mind though, the Dubliner has UFC 202 and his rematch with Nate Diaz to focus on. In a rather dull, by his standards, press conference at the T-Mobile Arena in Las Vegas - McGregor said there’ll be no repeat of the complacency that cost him in his initial defeat back in March.

“I’m preparing for a tall, lanky ugly Mexican southpaw - August 20th is my date, UFC 202, the real UFC 200, and I will have my redemption,” he said at Thursday night’s press conference in Vegas. “All my sparring partners are six foot plus – I’m sparring with all middleweights.

“I underestimated his durability and experience - I will not make the same mistake again... I’ll beat Nate, get that win back, dominate my division again, and we’ll talk for the trilogy fight.”

Diaz meanwhile refused to take the bait - “This arena is beautiful, but these microphones suck, I can’t hear.”

McGregor though was in his usual pompous mood, taking full credit for the UFC’s successful 2015. While giving a dig at the organisation’s decision to pull him from UFC 200 for failing to fulfil his media duties.

“I believe that there’s a $4.2bn estimate on the company because of me, and I feel like I carried this company in 2015.

“So I felt like I deserved a bit of leeway. But I have to understand that I didn’t communicate my point very well, and that was it. It is what it is, it’s in the past. Here we are. August 20. UFC 202. I’m happy to put it behind me and get back to competing and training for a contest.”

Meanwhile, the last man to have beaten McGregor (before Diaz) - Donegal’s Joe Duffy was also in action last night. Impressing with a slick rear-naked choke to finish off Canadian Mitch Clarke within 25 seconds.