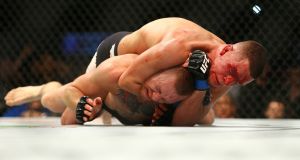 The night was over, he had won, but Nate Diaz couldn’t stop fighting. He had done what many fighters wished they could and stifled the voice of Conor McGregor but still it wasn’t enough. Years of slights don’t disappear in a night. With the spotlight finally on him, Diaz was going to air his grievances while he had an audience to hear them.

“[MCGREGOR] has gotten a push [FROM THE UFC], he’s got a lot of people behind him and I wish I had the same push and the same help,” Diaz said after his victory over McGregor. “I’ve been doing this a long time, it’s been nine years. I’ve been the last few years wondering: ‘OK when is this going to pay off?’ And I think it’s time.”

Nothing in fighting is more endearing than the lifer who has toiled in the shadows, dreaming of that one great shot. Diaz is skilled and resilient and tough. He should have been the loveable underdog in his Rocky moment against McGregor and there was something sad about the way he seemed to beg for the acclaim that gets so easily handed to men like McGregor.

In the days before UFC 196 he kept boasting of his study with some of the best coaches in combat sports including the jiu jitsu expert Cesar Gracie and top-level kickboxers – men McGregor mocked as “juiceheads and bums”. Diaz’s words fell empty in the pre-fight bombast. No one wanted to hear about Cesar Gracie or how Diaz had improved his boxing technique when McGregor was squawking like a rooster and talking about eating his opponents alive.

Whatever strengths Diaz has were lost in his perpetual scowl, grinding voice and fondness for making statements with raised middle fingers. His image is not one of a great fighter but rather a tough guy lugging a Chrysler-size chip on his shoulder.

And this is the problem the UFC has with Diaz’s win over McGregor. Diaz might feel he has earned the promotion the UFC puts behind McGregor but he lacks the wit that make McGregor appealing to a broad audience. Fighters like McGregor, Ronda Rousey and Holly Holm are the UFC’s bridge to the mainstream. They can be sold as likeable characters in a violent world that still frightens many sports fans. The UFC can’t package Diaz up quite so easily.

McGregor might be profane in his takedowns of fellow fighters and in his own self-promotion but he plays great on Conan O’Brien. Diaz, who uses the word “motherfucker” as casually as a Wal Mart greeter might say “hello”, is not chat show material. He can’t front the organization. As the UFC keeps getting bigger, crawling toward $1bn in annual revenues, it needs Conor McGregor much more than it needs Nate Diaz.

It is probably too late for Diaz to alter his image, smoothing the rough edges that make him unpalatable to so many. The sneer that is locked on his face makes him the perfect villain, the ideal foil for every McGregor who comes along.

But many true MMA fans consider Nate Diaz and his brother Nick to be among the sport’s heroes. They have mastered complicated skills under the guidance of elite coaches and strut as brawlers uninterested in polishing their image. Nate has worked hard to improve his boxing technique, allowing him to take advantage of his long reach – and it’s reasonable to argue that his job is to win rather than charm. The shots on the UFC’s promotional production for the fight that showed Nate Diaz gently riding a bike on country roads and swimming laps in a pool are jarring given the aggressive way the brothers carry themselves. They are non-conformists who will take on anybody, any place, any time and show up ready to fight.

Even McGregor praised Diaz in the moments after the fight, saying he has always appreciated the way Diaz approached battle. But Diaz refused to accept the compliment, growling that it should have been obvious he would win on Saturday night. Where McGregor was graceful in defeat, Diaz was surly in defeat. He played the tough guy all the way into the fight and then in the hours after.

Saturday night should have been a celebration for a lifetime of dedication to some of the most-challenging disciplines in sport. The storyline should have been about a great jiu jitsu expert and grappler who got UFC’s biggest star on the ground and nearly squeezed the life from him. Instead, Diaz – as uncompromising as ever – remained the villain.