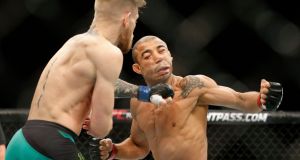 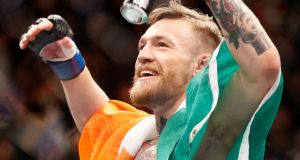 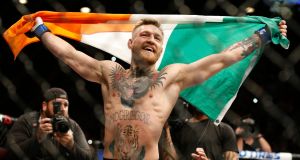 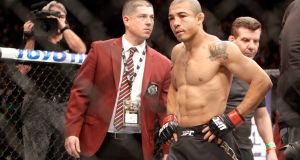 Jose Aldo walks away after losing to Conor McGregor in their featherweight title fight. Photograph: Getty 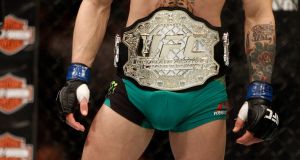 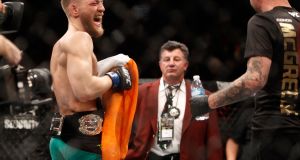 Conor McGregor celebrates with a member of his team after a first-round knockout victory over Jose Aldo. Photograph: Getty

After 14 months of build-up and 13 seconds of combat, Conor McGregor is the undisputed featherweight champion of the world after levelling the legendary Jose Aldo with his second punch of the contest.

The quickest title fight in the history of the UFC can be described in full in a single paragraph.

McGregor and Aldo advanced to meet each other in the centre of the Octagon, McGregor getting there first. He threw a left, which Aldo dodged, and followed it up with a low prod of his right foot.

The fighters bounced on the balls of their feet and twice pawed at each other’s lead gloves. Then Aldo lunged forward, swinging his right hand. McGregor anticipated the punch, stepped back, and cracked the advancing Aldo square on the jaw with a left hook.

Aldo’s left had already started swinging and it crashed into McGregor’s face, but the champion’s lights were already out. He fell heavily on his left side and rolled onto his back. McGregor pounced to hammer his left fist twice into Aldo’s defenceless head before the referee dived in to stop the fight.

Your correspondent’s complete notes from the fight ran as follows:

“McGregor down in Gorilla pose... get back... walking around like gorilla. Aldo in prizefighter stance...bouncing”

McGregor bounded away and leaped to sit astride the fence, rejoicing in the acclaim of the astonished capacity crowd. It was a stupefying, unreal moment.

Within a minute Aldo had got back to his feet, and standing by the wall of the cage he seemed to be remonstrating with the officials. If he was complaining that the fight had been stopped too early, it could only have been the result of confusion brought on by the concussive blows he had taken to the head.

There could be no arguments. His ability to defend himself had clearly deserted him. The referee did Aldo a favour by stopping the fight. 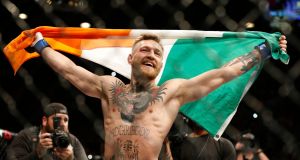 There is inevitably a sense of anti-climax when a fight that everyone had anticipated would be a war is over within 13 seconds. But McGregor can hardly be blamed for succeeding so spectacularly that he didn’t even have time to break a sweat.

To destroy an undefeated champion - a man rated the best pound-for-pound fighter in the sport - with your second punch of the night? We’ll be waiting a long time for anyone to improve on that.

Though nobody else could believe it, this was what McGregor and his camp had been predicting all week - all year even.

McGregor had promised it would be over in the first round. His coach, John Kavanagh, had said in the build-up to the fight that part of him could see the fight being over in 60 seconds. At the time it sounded outlandish, even reckless.

After McGregor turned up at the weigh-in looking emaciated, his odds had drifted and Aldo became the marginal favourite. Many of the Irish supporters fell prey to that sense of nerves.

There was a lingering dread that this could turn out like Poznan, thousands of Irish supporters getting themselves all worked up over something that could be about to go horribly wrong.

Oh ye of little faith. Kavanagh’s prediction, which sounded so overconfident during the week, turned out to have been conservative.

“I did say that the right hand would be his downfall,” McGregor said. “What I say happens, happens.”

When Aldo spoke to Rogan in the ring, his eyes were red from crying. “I think that we need a rematch,” the humiliated ex-champion said as the Irish fans booed. “That really wasn’t a fight. We need to get back in there.”

Aldo will be lucky to get a rematch. His relationship with the UFC has been frosty for some years. The organisation will probably be delighted to have rid itself of a champion who never shifted many pay-per-view buys.

Poignant images soon emerged of Aldo sitting on the ground of his dressing room, head bowed, surrounded by his coach and cornermen, each of whom had mirrored their man’s grief-stricken pose. They all knew he might never get the chance to make amends for this disgrace.

“I think Aldo should reassess himself while I look to maybe go for the 155-pound belt or maybe I look at Frankie, so there are options,” said McGregor, who also picked up a Performance of the Night bonus for the record-setting win.

Now thoughts will turn to what fantastic prediction of McGregor’s might next become reality. His big theme over the last few months has been his ambition to earn Floyd Mayweather money.

In defeating Aldo, McGregor had probably earned half a million dollars per second. Step aside Mayweather, whose victory over Manny Pacquiao was worth a mere $83,000 per second, though admittedly it did go the full twelve rounds.

The idea that a mixed martial artist could earn nine-figure sums no longer seems quite so ludicrous after a victory that has made Conor McGregor the most marketable star not only in the UFC, but in any combat sport.

McGregor is keen to move up a weight class to open up a new worlds to conquer and make those weight cuts a little less gruelling, but the UFC wants him to make at least one featherweight title defence, probably against Frankie Edgar, before he makes the transition to lightweight.

The last thing they want is to be left with a vacant belt, but what they want is no longer as important as what McGregor wants. As we’re constantly being reminded: What he says happens, happens.