Commodores’ Cup defence to be addressed at cruiser conference 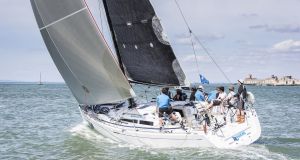 An 11th-hour extension to a charter option that would enable Ireland’s defence of the Brewin Dolphin Commodores’ Cup this Summer will be a hot topic at tomorrow’s annual conference of the Irish Cruiser Racing Association in Limerick.

On offer is the third boat of the team, with new sails and a crew package ready to begin training. The cost is understood to be €70,000 for a “turn-key’ campaign. An additional two weeks has been added to the charter option for Quokka 8 that was part of the successful Ireland team in 2014 and would join captain Anthony O’Leary and Michael Boyd who spearheaded the last effort.

Nevertheless, ICRA officials acknowledge the economic situation may hinder the efforts to complete the team and another year would improve the chances of attracting a suitable owner-charterer. The news comes as cruiser-racing sailors from around Ireland are expected at the Castletroy Hotel tomorrow morning representing the backbone of the sport that numbers between 3,500 and 5,000 active participants according to ICRA. The defence of the Commodores’ Cup will be one of the issues under review during the day.

Handicapping systems are used when different shapes and sizes of boats race against each other. Mathematical formulae based on measurements of each boat help calculate a handicap that races are scored. Thus, an older boat of a slower design but sailed well may finish behind a newer boat in a race but after handicapping is applied improves its placing or even beat the faster boat.

But ORC promoters criticise IRC for containing secret calculations intended to prevent new – and more costly – boats being built to win by “beating the handicap”. However, ORC does contain methods for changing handicap ratings depending on the wind conditions for any given race. This feature addresses huge performance advantages some designs have for specific conditions such as in heavy airs where they might perform well but fare poorly in light winds with the converse applying to other types of boats.

The ORC system relies on a velocity prediction programme taking account of hundreds of different measurements to assess any one boat’s performance potential. The IRC system has 40 measure points but the formula to calculate the actual handicap is known only to the rating offices in England and France and changes are made annually to take account of developments. Whether Ireland moves to adopt the ORC remains to be seen. According to ICRA, any changes in this country will be based on demand by sailors.

Additionally, the announcement today of the inaugural IRC European Championships to be held as part of the Volvo Cork Week in July along with the Beaufort Cup for services such as Navy, Army and RNLI suggests Ireland’s relationship with the RORC remains strong.