Checkmate XV named Boat of the Year at Irish conference 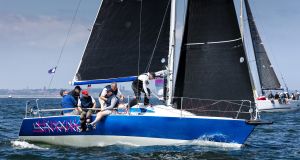 After a season of wins at home and abroad, Checkmate XV, skippered by Howth Yacht Club’s David Cullen emerged as Boat of the Year at the Irish Cruiser Racing Association conference in Lough Derg at the weekend.

The restored half-tonner won the inaugural Wave Regatta at its home club before later winning the Half-ton Classics Cup in Belgium later in the summer.

The season caps a steadily growing record for Cullen in a year where there was no Irish national championship held under the IRC rating system that might ordinarily have delivered a winning overall boat.

But Cullen was previously a candidate for the 2017 Irish Sailor of the Year award and will also be in the running again at the next ceremony early in the new year.

The ICRA meeting saw the formal hand-over of the reins of the organisation to another Howth member, Richard Colwell, who will lead the task of renewal in this branch of the sport, which has an estimated 7,000-plus regular participants in Ireland.

Following on from the ICRA meeting, the coming weekend sees another cruiser-racing-type body hold its annual gathering at the National Yacht Club in Dún Laoghaire.

The Irish Sea Offshore Racing Association (Isora) is celebrating a busy and successful season according to its secretary, Stephen Tudor of Pwllheli Sailing Club in Wales.

A total 15 races were held for 60 boats in 2018 despite losing more than five regular boats from Holyhead following the wipe-out of the marina there during Storm Emma in March.

Holyhead is expecting to have swinging moorings for the 2019 season.

The entries come from 14 clubs and all corners of the Irish Sea to compete in longer-distance and overnight races.

“People say of offshore [sailing] that it’s something that you hate to do but love to do it again!” Tudor said. “What we try to do in Isora is tie boat movements to races to minimise deliveries for boat skippers and crew.”

That policy is in response to the pressure on time that many crews face, but staging fewer, longer races is helping to build numbers once again.

“We see boats staying on the south coast [of England] and people don’t travel, prefer to do their own club events. But on the Irish Sea, people are willing to travel provided the events are not a full week, more like a long weekend,” he said.

So the forthcoming 2019 season will continue that practice in July that includes the 100th anniversary of the Midnight Race (Liverpool to the Douglas, Isle of Man) the weekend before the Volvo Dún Laoghaire Regatta followed by a feeder race to Dún Laoghaire the next day leaving the fleet ready for the next event three days later.

The 2019 programme will have another feeder race on July 27th from Dún Laoghaire to Pwehlli for Spinlock Welsh IRC National Championship.

That event will count towards the overall Celtic Cup that was won by Howth J109 Storm.

There is some debate likely over the inclusion of the Dún Laoghaire to Dingle Race in June and whether it will be a high-scoring race or not as the finish is outside the usual Isora catchment area but the 300-nautical mile course is considered a big draw for the Isora boats either way.

Meanwhile, the Notice of Race for the Dún Laoghaire Regatta has been issued for the event running from July 11th to 14th next. Upwards of 480 boats are expected from 39 classes and representing 75 different clubs

Visitor numbers are also on the up, with at least seven nations expected.