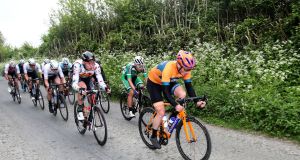 As the 2018 racing season heads into the traditional winter break, there are uncertainties relating to Irish riders and teams for next year. The Irish-registered Holdsworth Pro Cycling team is yet to confirm it will continue into 2019, with some reports suggesting it could come to an end.

Shaw and McKenna were previously with the An Post Chain Reaction team. They were given a lifeline by Holdsworth after the An Post team lost its sponsorship last year and was unable to find new backing in time for 2018. General manager Kurt Bogaerts had hoped that the squad would return for 2019 but is still searching for a new sponsor.

The British-registered, Irish-managed Team Wiggins squad will race next season, but is being scaled back in size due to budget restrictions. This year Michael O’Loughlin, Mark Downey and Matthew Teggart were part of the squad. Downey and Teggart are no longer classified as under-23 riders next season, and with the team focusing on this age group, they will therefore have to race elsewhere.

O’Loughlin will remain, though, and will hope to have a big season after an inconsistent 2018.

He was affected by injury and illness but results such as fourth on a stage of the Tour de l’Avenir, second in the mountains competition in the Tour Alsace, gold in the Irish under-23 time trial championships and fourth in the elite road race championships underline his ability.

Philip Deignan is yet to announce his plans for 2019. Neither he nor his agent responded to requests for clarification on Thursday, but it is understood that he has had some offers from teams.

Deignan won a stage of the Vuelta a España in 2009, proving his class, but in recent years he has settled into life as a domestique for Team Sky. He has been with the team since 2014 and while he has ridden strongly in the service of others, he has often been left on the sidelines for big events. He is yet to ride the Tour de France and wasn’t given a start in any Grand Tour this year.

He has also done just one UCI race since mid-June, making things difficult in terms of a contract search. However, Deignan’s climbing abilities make him a clear asset to pro teams. Depending on his next squad, he may have a much better chance to show what he can do.