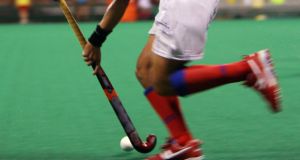 Jonny Bruton’s double saw Three Rock Rovers return to the top of Leinster division one as they snuck a tightly fought battle with Monkstown at Grange Road on Saturday.

Town had briefly moved back to the summit on Thursday evening with a 4-2 win over UCD, their fifth straight win, but found Rovers in rude form to swap positions once again.

The Rathfarnham men were indebted, though, to goalkeeper Stephen West, while his side took their chances at the far end to keep their unbeaten run intact.

Bruton got his first in the fourth minute when he latched onto a third-phase rebound after Mitch Darling had cracked the initial chance at goal. David Cole, while tightly marked by Jody Hosking, applied a beautiful touch behind his back from a right-wing cross in the ninth minute in a high-tempo first period.

Defensive error
Early in the second half Bruton capitalised on a defensive error after Darling and Mick Maguire combined well, setting up a great finish.

The win gives Rovers a narrow one-point lead and with a slightly larger than anticipated wedge over Pembroke, who fell 4-3 to UCD in Belfield.

Shane O’Donoghue grabbed the winner there with his third of the afternoon just four seconds from the full-time hooter.

Glenanne moved into the top half of the table with a 3-0 win over Fingal while YMCA recorded their first win of the campaign with a 5-1 success against Rathgar.