British number one Andy Murray pulls out of Rome Masters

Scot was enjoying unprecedented spell of success on clay, which included Nadal win 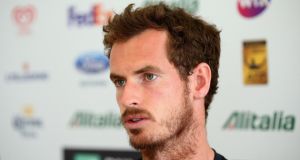 Andy Murray has pulled out of the Rome Masters. Photograph: Getty

Andy Murray pulled out of the Rome Masters on Thursday afternoon, citing tiredness after an unprecedented run of success on clay that finally caught up with him, and will return to London before resuming his preparation for the French Open, which starts on Sunday week.

“I felt OK yesterday,” he said. “I played a good match [beating Jeremy Chardy in straight sets]. But this morning I was pretty exhausted when I got up and then I came in to practise, did my 40-minute warm-up and felt extremely flat.”

Murray has consulted his team, led by Amelie Mauresmo, every day about his involvement and said the consensus was that he had got as much out of the tournament as he could expect. “We chatted for about half an hour. It didn’t make sense for me [to play his third-round match against David Goffin on Thursday afternoon],” he said. “A lot of studies suggest that when you’re very tired or run down you risk injury if you continue to compete. It’s not just about today. It could be three or four days time.

“I just was listening to what my body was saying, because I’ve played so much tennis – like nine matches in 12 days, also with a very physical schedule, and also a couple of doubles matches in there, as well as the whole preparation for this period. It’s been a very long three weeks for me, the longest I’ve ever had on clay in my career. It just seemed like the right thing to do.”

The world No3 was playing the best tennis of his career on his third surface, adding Chardy to his list of victims in fine style on Wednesday, after victory over Rafael Nadal in the Madrid Open last Sunday to crown a special stretch for him there and in Munich, where he also remained unbeaten.

The priority now is the French Open, where he has an excellent chance of bettering his two semi-final appearances so far. “I didn’t expect to do what I’ve done the past two weeks. My body has never been through that before on clay,” said the Scot. “It’s a surface that I’ve always struggled on physically, [ALTHOUGH]this year it’s been very good.

“I also don’t want to risk making it worse. In the past when I’ve maybe trained too much or done too much on the surface, I’ve had those issues.

“The time of the year is a tough one for everyone but I wanted to play in this event. It’s a big tournament, there are a lot of points on offer. That’s why I wanted to give it a go.”

He said Mauresmo’s advice was crucial, although he insisted it was a team decision. “From the physio’s perspective, he didn’t want me to play the other day,” added Murray. “The trainer said maybe it would be good to play a few matches but he could also see the benefits of resting for a few days so I could train well next week.

“Amelie was the same: it would be good to play matches at this event, at sea-level, but they saw me in practice this morning. It wasn’t like I just went out there and hit for five minutes. I practised for 40 minutes, a proper practise, warmed up correctly.”

He added: “I was just flat. I’m tired. My body’s tired. It’s completely normal, I think acceptable, to feel like that after the last few weeks. It was the right thing. I always wanted to play. We didn’t just speak for two minutes. It was a proper conversation, weighing up all the pros and cons. I’m very tired just now. I need to take a break.

“I’m going to take a few days to rest. I won’t train, won’t go on court. I’ll go home either tonight or tomorrow morning and maybe see my physio over the weekend to help the recovery process, try to rest and sleep. I’ll get to Paris early next week, and get some good days’ training there.”

Murray said nobody at the tournament tried to persuade him to change his mind. Certainly Goffin would be glad of that.