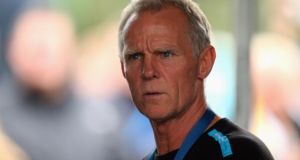 British cycling’s Shane Sutton has been suspended for alleged comments he made about Paralympic athletes. Photograph: Getty

British Cycling’s technical director, Shane Sutton, has been suspended pending a formal investigation into accusations that he called Paralympic cyclists in the British squad “gimps” and “wobblies” on multiple occasions.

The Australian, who mentored Sir Chris Hoy and Sir Bradley Wiggins to Olympic glory before taking over the top role in British cycling in 2014, was already under scrutiny after allegations of sexism made by the track rider Jess Varnish at the weekend. But the latest damaging comments about Britain’s hugely successful Para-cycling squad leave Sutton’s future as technical director dangling by a thread and British Cycling in turmoil just 100 days before the Rio Olympics begins.

Darren Kenny, one of Britain’s most decorated para-cyclists, told the Daily Mail: “The term used to refer to us was generally ‘gimps’ with another word in front of that. I don’t think we were considered to be elite athletes in all honesty by certain people and since I’ve left I’ve not seen or heard of any change towards equality.”

The paper also quoted another source who worked closely with Sutton, saying: “They were referred to as wobblies. It was an in-joke used to describe para-cyclists.” Sutton denies all the allegations.

The revelations forced British Cycling to announce it was launching two separate investigations within the space of a few hours on Tuesday night.

The first, an independent review under the auspices of UK Sport, is due to examine Varnish’s claims that Sutton told her she was “too old” and “should just move on and go and have a baby”, allegations he has strongly denied.

That review, which British Cycling hoped would be completed before the Olympics, will also examine fresh allegations from Varnish that there was a “culture of fear” inside the organisation which prevented staff speaking out about sexism because they were afraid of losing their jobs.

Shortly after midnight the organisation announced there would also be a second investigation which will focus solely on Sutton’s conduct.

A British cycling spokesman told the Guardian: “Following the announcement of an independent review into British Cycling’s performance programmes, we are also announcing technical director Shane Sutton has been suspended pending an internal investigation into the allegations of discrimination that have been reported in the press.”

There is a very real possibility this later investigation will not be finished in time for Rio leaving Sutton in limbo and British Cycling without a coach who originally joined the setup in 2002.

Varnish, meanwhile, says she has been “amazed” at the support she has received since speaking out about alleged sexism at British Cycling, which has included backing from the former Olympic and world road race champion Nicole Cooke and the double Olympic champion Victoria Pendleton.

“I have been contacted by other riders both present and past, to say that they have experienced similar behaviour at British Cycling,” Varnish added. “I am aware that some people at British Cycling are afraid to come forward due to the culture of fear that exists, as they don’t want to lose their jobs.”

However British Cycling insists that Varnish did not raise concerns about sexism, bullying, or a culture of fear at the organisation during her appeals procedure. Furthermore, it says it actually extended the appeals process deadline several times after Varnish initially failed to appeal, precisely because it wanted to give her the opportunity to have her say.

And after being released from British Cycling’s elite programme on performance grounds, Varnish refuses to believe her hopes of Olympic glory are over. “At 25 years old I feel my best years are ahead of me,” she said.

“Sprinters such as Jamie Staff, Victoria Pendleton and Chris Hoy all achieved success well into their thirties, so I refuse to believe that my career is finished.

“I also want to change the culture at British Cycling and their treatment of women. I am not too old. I am not a waste of UK Sport’s money. I can win more medals.”