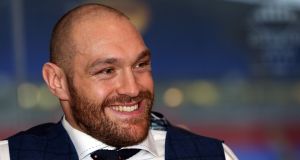 Tyson Fury has denied he is a homophobe and said he is ‘uniting the world’. Photograph: PA

Tyson Fury has been asked to attend a meeting with the British Boxing Board of Control in the new year in relation to recent comments he has made in the media, the governing body has said.

While no date has yet been made for the meeting, Fury is set to be asked to explain recent remarks in the media which have caused controversy and led to calls for the boxer to be removed from the BBC Sports Personality of the Year award shortlist.

Fury has claimed he is not interested in winning the BBC prize, insisting he has “more personality in the end of my little finger” than his shortlisted rivals, but has not ignored the controversy about his candidacy – which included comments about heptathlon champion Jessica Ennis-Hill, who he said “slaps up good” and “looks quite fit” in a dress, and that a women’s place is in the kitchen.

Fury also said in an interview with Jeremy Vine on BBC Radio 2 this week: “Homosexuality, abortion and paedophilia – them three things need to be accomplished before the world finishes. That’s what the Bible tells me.”

The 27-year-old has remained defiant amid the backlash, claiming he has been misunderstood, and in an interview with Sky Sports News on Thursday he launched another impassioned defence of his views while also claiming he was “uniting the world”.

Asked directly if he was a homophobe, he said: “No, definitely not. I wouldn’t be a very good Christian if I hated anybody, would I? If Jesus loves the world, I love the world.

“I can actually say that I have no hate for anybody. I haven’t any enemies, I don’t hate any race, colour, creed, generation, nobody.”

Fury believes his words have been twisted in the media and said the ethnicity of the team he works with was an example of how he was “uniting Christians and Muslims”.

“My team is one of the most diverse teams amongst religions in the world of boxing,” he said.

“Tyson Fury is uniting the world. Uniting Christians and Muslims in a time when everything is up in the air. We don’t hear about that, do we?

“We don’t hear about the good things that I’m doing – we just hear about the comments that people want to twist and want to make me sound like I hate people and that I hate the world.

Greater Manchester Police have also confirmed that they are investigating hate crime allegations against the boxer.

Fury has labelled that a “joke” and instead suggested he should file a complaint for abuse he claims he has received.

“You don’t hear me complaining about it do you. I don’t write any newspaper articles about it.

“I don’t hate anybody, I’ve said that a thousand times. If anybody should be investigated for being hated, it’s me isn’t it?

“I think I am one of the most hated sportsmen in the country at the moment, so I want to file a claim against everybody else. Compensation, victim’s crime compo – here we are, me.”