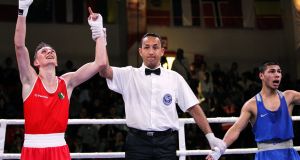 Ireland’s Brendan Irvine has qualified for the Olympic Games in Rio de Janeiro after a unanimous decision win over Bulgaria’s Daniel Asenov at the European Olympic qualifiers in Samsun, Turkey.

Coming off a semi-final defeat to Armenia’s Narek Abgarayan, the Belfast teenager boxed smartly in the face of an energetic and aggressive opponent in the opening round of the box-off.

Asenov was looking to make amends for a defeat to Britain’s Muhammad Ali in his own semi-final but his energy levels and spirit seemed undimmed by the defeat as he steered the bout towards a brawl without much in the way of a preamble.

Irvine slipped most of the Bulgarian’s shots in the opening round but was caught flush by several – a couple of overhand rights in particular gave the Belfast Boys’ Club fighter cause for concern.

The judges awarded Asenov the first round on a split decision, and he stuck with his aggressive approach in the second. But Irvine was wiser to it now, moving more nimbly, firing back more effectively, and causing his opponent to miss more frequently.

Having been warned about keeping his head up in the first round, Asenov was formally warned by the referee in the second – costing him a point on the cards.

The fight swung towards Irvine with the second round, as he took the round on all three of the judges’ scorecards.

In the final round Irvine looked to be tiring, but his sharper reflexes and footwork told, as they steered Asenov – who continued to unload in flurries – to swing and miss. The Bulgarian continued to land punches but with far less frequency than in the first round as his efficiency continued on a downward trajectory.

The final round was split on the scorecards, but Irvine took the points verdict on a unanimous decision to become the fifth Irish boxer to book his spot in Rio - joining Michael Conlon, Paddy Barnes, Joe Ward and Steven Donnelly

David Oliver Joyce will meet Turkey’s Volkon Goycek on Sunday afternoon in a box-off for his spot in Rio, while Katie Taylor will box off for third place – although Taylor cannot qualify for the Olympic games with a victory, having instead to wait for the world qualifying event in June.

1 Diego Maradona dies of heart attack, aged 60
2 Keith Duggan: Through the glories and the disgraces, we were all Maradona addicts
3 Andy Farrell to delve deeper into Irish squad for team to play Georgia
4 Gordon D'Arcy: I know what Joe and Cheika would do. Fix the basics
5 Diego Maradona: Five memorable moments
Real news has value SUBSCRIBE