Behind the Baseline: Accident of birth is holding Irish back at Wimbledon 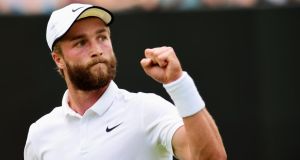 Britain’s Liam Broady took advantage of his wildcard at Wimbledon by winning his first round match against Marinko Matosevic, earning him about €64,000. Photograph: Shaun Botterill/Getty Images 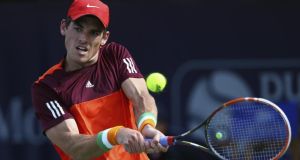 Ireland’s James McGee, despite a career high ranking of 146, will have to fight his way through qualifying in order to make grand slam events. Photograph: Francois Nel/Getty

Irish tennis players may not appear in grand slam events often but sometimes it is not always their fault as the first week at Wimbledon illustrated. Occasionally paths can be smoothed out and deals done with those countries that host the major tennis events. Australia, France, USA and Britain use their tournaments to their best advantage.

In the ATP rankings Ireland’s James McGee is listed at 146 in the world, yet he is not here. McGee, who is playing on the Challenger tour, the second tier of the men’s tour, didn’t make it through the three rounds of matches in the qualification event at Roehampton prior to Wimbledon starting.

McGee didn’t earn any money from Roehampton; he did earn €2,130 for making the semi-final of the Aegon Ilkley Trophy, where he lost to American Denis Kudla (131); and before that he made it to another semi-final at Surbiton, where he came away with €2,130 after falling to Australia’s Matthew Ebden.

Broady is one of the wild cards at Wimbledon, meaning he is there by invitation. The organisers also gave wildcard entries to French, Australian and American players, including Ebden, who is ranked a couple of places below the Irish player at 148.

There are 128 players in the Wimbledon singles draw. Of that number, 111 gain direct entry based on the women’s WTA and the men’s ATP rankings. In addition, 12 players get in through qualifying at Roehampton; and there are five wild cards.

The way the system works is simple. When the other slams come around, the British players will find favour with the organisers and have a better chance of getting into the main draw if they do not qualify on merit. McGee will never be offered a wild card because Ireland has nothing to offer in return.

For players like Broady and Ebden, it means entry into the slams and decent pay cheques; it’s almost like a form of funding. It’s unlikely they would get wild cards into all four tournaments but if they did and won a first round match in each, they would earn in excess of €200,000 a year. Losing a first-round match at Wimbledon this year is worth €29,000.

This is McGee’s best year and so far he has won €48,041, but it’s less than Broady has earned at Wimbledon. The Irishman’s ranking is also improving and from 228 at the beginning of the year his current 146 mark is as high as he has ever been. He is getting close to Conor Niland’s high water mark of 129.

It’s all just part of tennis life at the world level. McGee is Irish and not British. To Broady’s credit, he took advantage of an opportunity. But it’s an opportunity McGee, Sam Barry or Amy Bowtell will never be able to avail of.