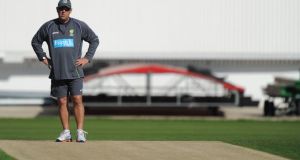 Australia coach Darren Lehmann has accused England’s Stuart Broad of “blatant cheating” and has urged cricket fans Down Under to make sure the bowler “cries and goes home” during this winter’s return Ashes series.

Broad has earned the wrath of Australia’s players and fans this summer following a number of incidents during the current Test series, which England lead 3-0 heading into the final match at The Oval.

The 27-year-old did not walk when he nicked a ball behind in the first Test, while he has also been accused of time-wasting tactics to benefit England when they have been up against it.

The Nottinghamshire man admitted this week that he knew he had hit the ball at Trent Bridge, while speaking of England’s win-at-all-costs mentality.

That approach has not impressed Lehmann, though, who has encouraged the Australian fans to make sure that they let Broad know what they think of him when the next series starts on November 21st in Brisbane.

“Certainly our players haven’t forgotten, they’re calling him everything under the sun as they go past,” Lehmann said of Broad’s failure to walk in an interview given to Australia radio station Triple M.

“I hope the Australian public are the same because that was just blatant cheating. I don’t advocate walking but when you hit it to first slip it’s pretty hard.

“From my point of view I just hope the Australian public give it to him right from the word go for the whole summer and I hope he cries and he goes home.

“I just hope everyone gets stuck into him because the way he’s carried on and the way he’s commented in public about it is ridiculous.”

Broad has angered Australian fans further by helping England to their third successive Ashes win, with his brilliant bowling in the last Test securing victory on a dramatic fourth afternoon in Durham.

His popularity with home fans is higher than ever as a result, but Lehmann has no interest in indulging him and went on to accuse him of letting the umpires – much-maligned during the series – take the blame on his behalf.

“He hit it to first slip ... and the biggest problem there is the poor umpire cops all the crap that he gets in (the) paper and Stuart Broad makes them look like fools,” he added.

“From my point of view it’s poor, so I hope the public actually get stuck into him.”

Speaking earlier this week Broad referred back to the Trent Bridge incident, admitting he knew he had nicked Ashton Agar’s delivery but Broad claimed his failure to walk was not as clear-cut as it had been portrayed.

”It was an odd one. There was no particular noise because of the noise of Haddin’s gloves,” he said.

”It’s a bit silly when people say it was nicked to slip because actually it was edged to the keeper’s gloves and flew off the gloves to slip.

”I went down to the other end and Ian Bell was like ‘what happened there, I didn’t hear anything?’ Agar came up to me and asked if I’d nicked it because he wasn’t sure.

”So it wasn’t as clear cut as everyone had thought, although I knew I’d hit it.“

The England and Wales Cricket Board declined to comment when asked about the comments from Lehmann.

Former England captain Nasser Hussain believes Lehmann’s comments could create problems for Broad in Australia, not only on the field but off it too.

The 45-year-old pointed to the fracas earlier in the summer when David Warner was suspended from the Australia team for aiming a punch at Broad’s England team-mate Joe Root at a Birmingham bar.

While Hussain is confident the players will be on their best behaviour, he believes the management of Broad off the field will be key.

“These boys go out on an evening, they don’t sit in their hotel room,” Hussain said.

“That’s more likely where Broad will have to be careful because after these words, there might be some Aussie out there that, after having a few beers on an evening, wants to have a little go at Broad.

“Broad, especially after the Warner incident at a bar in Birmingham, and the management of Broad away from the cricket will have to be very, very careful.

“But these are grown men, they can look after themselves and know how to behave like England cricketers, hopefully.”

Hussain does not think the story will distract from England as they attempt to seal a 4-0 series victory at The Oval.

“The players will probably know about it with modern media and social media. They’re not allowed their phones on in the dressing room but coming in, you can bet it was on a radio station or someone had tweeted it around the world,” he added.

“There would have been a little bit of fun but once they get to the ground it will be switching on to try and win 4-0.

“England very much have this siege mentality, they will blank all this stuff and concentrate on winning here and winning 4-0 against Australia, which they’ve never done.”

1 On healing and wild hurling: The re-education of Diarmuid Lyng
2 ‘Your father works for my father’: Schools rugby turning toxic in the stands
3 Wexford best the weather and Kilkenny on a mad day to be hurling
4 Few, if any, have given as much to Munster as Garrett Fitzgerald
5 Keith Earls far from ready to abandon centre stage
Real news has value SUBSCRIBE