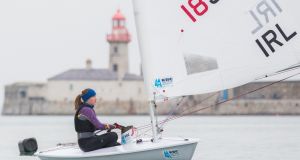 Annalise Murphy has won the Irish Sailing Association selection for Rio after a three event trial that concluded in Mexico on Wednesday. Photograph: Naoise Culhane.

Annalise Murphy (25) will make another bid for Olympic glory this summer after winning the Irish selection trials in the Laser Radial dinghy in Mexico this week while in her home port of Dún Laoghaire yesterday a World Youth Championships in that class was launched.

Despite a disappointing silver fleet performance this week on Banderas Bay, Murphy won the trial following the conclusion of the Women’s World Radial Championships.

Murphy will now focus on regaining that kind of form in the last two World Cup events before the Games in 100 days’ time. It will not be lost on her that the new world champion crowned on Wednesday is Briton Alison Young, an arch rival who finished behind Murphy at London 2012. Murphy was third in the silver fleet overall or 39th from 71.

Hopkins will now focus efforts on Dublin Bay, where the 17-year-old, (who beat Murphy in three of seven qualifying races this week) will be among a crop of the latest Irish hopefuls at July’s KBC Laser Radial World Championships launched yesterday.

The 400-boat event was confirmed Thursday lunch time by Dún Laoghaire Harbour Company’s Eithne Scott Lennon. In a new template for sailing events on the capital’s waters, the biggest dinghy sailing event in the country this season will be jointly hosted by the state company and the Royal St George Yacht Club with over over 30 nations expected to compete.

Ireland’s recent international successes at youth level – that includes three World youth sailing medals in four years – is prompting local predictions of a further haul this summer. Even with home waters advantage, a more realistic expectation might be a top 10 finish on home waters in either the boys or girls divisions or both. A mens division is also part of the championships.

Ireland has previous success at world Radial youth level. For example, seven years ago, Wexford’s Philip Doran took the under-17 world championship title in Japan. A year earlier he won the under 16-title. In that same year, 2009, and same venue, Murphy, then aged 19, won the under 21-world title.

Since then, Ireland has gone on to two silver radial medals at the world youth sailing championships and the Irish Sailing Association’s (ISA) James O’Callaghan maintains those previous results from Finn Lynch in 2012 and Seafra Guilfoyle in 2014 are no flash-in-the-pan.

Proof of that was delivered again this month when Royal Cork’s Johnny Durcan’s took 10th overall at the massive Laser Eurocup event in Hyeres. Durcan is not alone, also making a name on the international circuit is Howth Yacht Club’s Ewan McMahon who only narrowly missed out on the boy’s European (under-17) Laser Radial title in Portugal at the weekend.

ISA youth champions Conor O’Beirne and Nicole Hemeryck, both from Dublin Bay, will also be in action at the Radial event. There are an estimated 25 places allocated for Irish boys and six for Irish girls at the event.

Next July is also the month for the ICRA Cruiser National Championships at Howth Yacht Club. Early entry closes on May 6th.