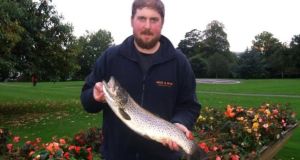 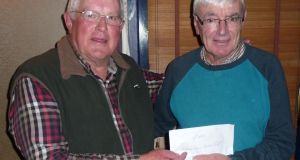 What better way to end the wild brown trout season than a day’s fly fishing on Lough Lein in Killarney, Co Kerry? Apart from the fishing, the surrounding mountainous scenery of this striking 4,700-acre lake is sufficient for most and certainly worthy of its worldwide status.

The occasion was the annual Mike Hegarty Charity Competition which saw 40 anglers (20 boats) heading out from Ross Castle with the customary barbecue on Brown’s Island. Chefs Cyril Boggins and Tom Dennehy served up delicious steaks, potatoes, mushrooms and onions cooked over a log fire.

Proceeds from this year’s event went to the Killarney branch of Irish Pilgrimage Trust. Accepting a cheque for €600, spokesman Tim O’Brien said: “This generous donation will go towards sending children with special needs to Lourdes. ”

Fishing could best be described as a “mixed bag” with the morning session yielding only two counters, due in the main, to slack winds. However, conditions picked up in the afternoon and fish began to move more freely, resulting in 29 presented for weigh-in.

“I can put the rods away now for 18 weeks and concentrate on selling my flies around the country,” he said. Watch out for him, his flies certainly work.

I enjoyed my day with Francie Kiely from Macroom on the East Lake as we fished close to the “chicken and hens rock” and “elephant rock” (both rock formations from the Ice Age), with good success. I boated at least seven fish with two counters.

Our day was rounded off with a delicious four-course meal in the Dromhall Hotel and a prize for the 20 anglers who caught fish. Results: 1, B Shields, 3 fish; 2, JJ Hannon, 3f; 3, E O’Leary, 3f.

Experts from Inland Fisheries Ireland, Tom “Doc” Sullivan, Prof Ken Whelan and Fissta will host talks on angling topics, and the tackle trade will be represented with a huge range of trade stands. For more details, see irishflyfair.com.

The supper is the latest national fundraising initiative to raise money towards crew training, crew kit and running costs of the lifeboat stations.