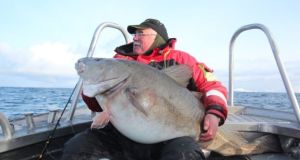 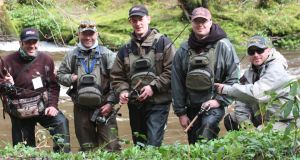 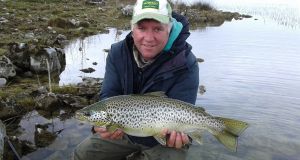 Corrib angler Larry McCarthy with his 2.7kg trout on duckfly 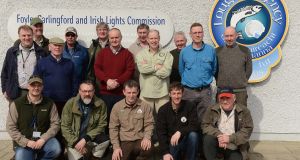 Bert Williams from Prenton, Wirral, in Liverpool, is celebrating after landing the biggest cod ever caught by a British angler, according to a report by BBC news. Williams (71) caught the 42.18kg (93lb) monster while fishing off Soroya, Norway, and initially thought he had hooked into a dolphin.

Paul Stevens, a guide who organised the trip with Sportquest Holidays, said: “The previous day, I caught a cod of 38.1kg (84lb cod). I held the British record for 24 hours!”

The record-breaking fish, which died after it was boated, will be moulded into a fibreglass replica and mounted at the firm’s offices in Norfolk.

The initial cycle concluded its three-year term in 2014 and following a review of the findings, its structure has been modified to enable more effective operations.

Each of the main angling organisations is requested to nominate two members for the duration of the second cycle. It is anticipated these nominees will then be formally appointed by the Minister.

The process of selecting remaining members will be managed by the Public Appointment Service with support of IFI. The forum shall consist of not more than 60 members.

An information booklet providing information on recruitment process and the next cycle can be accessed at: http://publicjobs.ie/publicjobs/campaignAdvert/29300.htm.

Meanwhile, IFI has launched a report on a scientific survey of adult fish stocks in Lough Ree. The report details findings of a fish stock assessment undertaken in 2014 to establish the status quo of all fish stocks, with particular reference to the brown trout population.

As part of the survey, brown trout samples were collected and will feed into the greater mid-Shannon brown trout genetics study, currently underway between IFI and Queen’s University Belfast.

The survey also provided ecological information in relation to the status of invasive species such as zebra mussel (Dreissena polymorpha) and Asian clam (Corbicula fluminea).

Pollan are a listed protected fish species on Annex V of the EU Habitats Directive and Ree is only one of five lakes throughout the country that they are found in.

IFI’s Dr Byrne, said: “Lough Ree can be regarded as one of Ireland’s premier mixed fisheries. Mixed, in this instance, is a reference to three different fish stocks – cyprinid, pike and trout stocks. The status of these fish populations is such that each can provide quality angling on a seasonal basis.”

The survey report is available at http://www.fisheriesireland.ie/fisheries-management-1/652-lough-ree-final-report.

The scheme hopes to bring more young people and minority groups into the sport.

Up to 16 teams from North America, Asia and Europe will compete on Loughs Corrib, Inagh, Fee and Muck for the prestigious title. The council, along with about 150 local club anglers, will assist competitors by supplying boats and boatmen for the four-day event.

An opening ceremony will be followed by a grand parade led by St Patrick’s Brass Band and local Irish dancers from Eyre Square to the Spanish Arch on Monday evening at 6pm. Presentation of prizes will be held in the championship headquarters Connaught Hotel in Galway on Saturday evening.

Ireland coarse fishing team named
The National Coarse Fishing Federation of Ireland (NCFFI) is pleased to announce the team to represent Ireland at the 14th world championships bank fishing with lures on the River Poprad in Slovakia, in May.

Through a process of qualifiers the team was chosen on the River Cusher in Co Armagh. Unfortunately, the river was in flood and fast flowing but it did highlight the specific skills required to deal with all conditions.

Team manager, Tomasz Kurman, said: “I would like to thank our sponsors, Vass Waders and Rainwear, Main Irish Angling, MIA and the NCFFI for their continued support.”

Drowes salmon catches continue
For the second week in succession about 20 salmon were caught on the Drowes. Most methods worked well including fly, prawn, shrimp and Flying “C”. Michael Kruse recorded a salmon of 3kg on fly from the Mill Pool and Niall Ritchie caught and released a good fish on fly from the Terrace.

Spring salmon at Carrowmore
Despite changing conditions, spring salmon fishing on Carrowmore Lake has remained good for the past two weeks with a number of double-figure fish reported. Successful flies were Black Dabbler, Green Peter, Carrowmore Pink and Clan Chief.

Note: Carrowmore Lake is a brown tag fishery this year. For fishing, contact Seamus Henry on 01-9783487.

Salmon success on River Bonet The River Bonet produced a number of fine spring salmon recently and one of the most productive spots was Alan’s Pool near Dromahair. All fish were caught spinning.

Trout fishing improves on Melvin
On Melvin, trout fishing has improved greatly with most rods fishing wets. Catches have been from the shallow water marks. However, in the next number of weeks the deeper water should start to fish as greater daylight hours mean the plankton begin to bloom.

Mayfly Inn Cup
Lough Arrow Fish Preservation Association & District Anglers held the Mayfly Inn Cup last week. Conditions looked promising at the start but as the day progressed, anglers realised the cold weather still impacted on fly life and hatches. Despite these challenging conditions, the 25 competitors recorded 13 fish for the day. The winner was Paddy Carr with a fish of 1.23kg.

Larry McCarthy of Corrib View Lodge, Glencorrib, reported a fantastic start of the new season with 61 fish recorded since March 20th. One of Larry’s regular visitors had 12 trout including two over 2.5kg. Larry added another six pounder to his catch list while fishing with visiting angler Malcolm Patrick.

Duckfly hatches have started to slow down in some areas but as they do, olives are starting to appear which should provide good opportunities for the coming weeks.