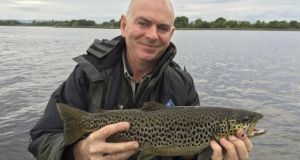 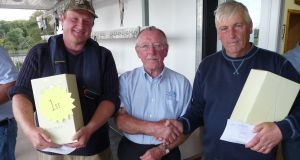 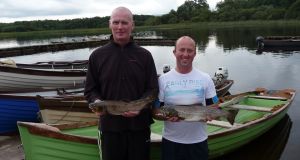 Jonathan Craven (right) with the heaviest fish of 2kg at Melvin Open and Kieran Biggins with 1.3kg trout 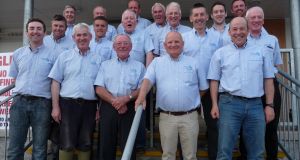 The 37th Lough Melvin Open Trout Championships was again an outstanding success with more than 300 competitors from across Ireland, Scotland and the UK seeking to outwit their rivals in this four-day team event of top-class angling.

While Melvin is unique in its selection of trout species, which include sonaghan, gillaroo, ferox and brown trout, the championships focused solely on the sonaghan. These dark-bodied, relatively small fish, are to be found in the deeps feeding on daphnia and emerging insects.

If there was one word required to catch these daring creatures it would be “perservance”. Long drifts will pay dividends eventually and when it comes to suitable flies, virtually any recognised pattern will work on their day.

Such was the case for the winning duo of Fechin McMorrow jnr and James Cox who, on their qualifying day, managed five fish (three and two). However, on finals day, it was Cox who triumphed with four fish for 1.260kg, sufficient to win the championships.

Cox, landscape gardener and sponsor of the championships from Mulleek, Co Fermanagh, said: “We had long drifts across Ross’s Point on the Rossinver side of Garrison Bay. I caught all my fish on a Gorgeous George and Legs 11.”

The Melvin Anglers’ Association is thriving in every sense of the word. Their relatively new clubhouse on the shores of the lough is a sight to behold and easily the finest in the country.

Encouraging youth into angling is also high on their agenda. Recently, a fly-tying class conducted by committee members attracted 40 youngsters. And a second session brought the group to Birchwood Fishery, Drumquin, where they tested their newly tied flies with favourable results.

Addressing the large crowd at the prizegiving, club president, Michael Gilroy, said: “Sincere thanks to all those who travelled long distances and to our many sponsors, especially Spar for the ‘goodie bags’ for each angler. Thanks also to my hard-working committee ‘things don’t just happen!’”

As a result of these discussions, the board has agreed to defer its proposal indefinitely. However, the parties recognised that there are significant economic, environmental and biological issues surrounding the current production facilities which need to be addressed.

IFI is committed to seeking funding for a comprehensive strategy to meet current and future trout production needs, contingent on obtaining the significant investment required.

Parties to the discussions agreed to continue to work closely together to deliver this strategy.

The board wish to acknowledge those who made submissions to the public consultation on exiting from freshwater trout production. This consultation process is now closed.

The Co Cavan venue was chosen to bring out the skills in the young anglers to fish a variety of methods. Top weight went to Eoin Rogers of Carrickmacross AC with 3.8kg.

Nine U-23’s, 11 U-18’s and nine U-14’s fished alongside eight novices for the championship trophy, with the top three in each section awarded a selection of tackle prizes sponsored by Tubertini UK Ltd.

At close of play all were provided with refreshments and the presentation of prizes followed in Minnies of Killeshandra. Running costs of the event were supported by NCFFI for junior development.

The RNLI’s Respect the Water Campaign advises all anglers to wear lifejackets when deep-water wading.