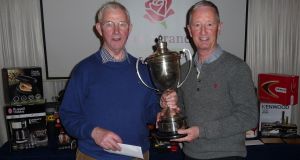 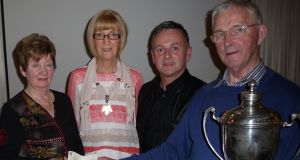 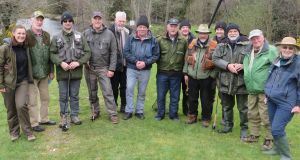 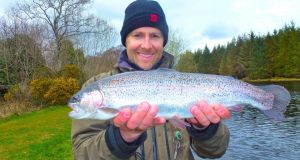 Keith Barry with his Annamoe trout 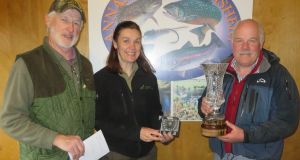 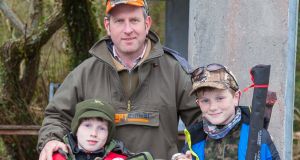 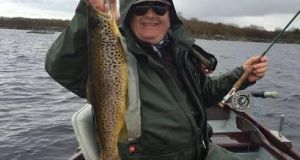 Stationed on the bridge overlooking the canal stretch alongside Ross Castle on Lough Lein in Killarney, Timothy O’Sullivan, “Timo” to his friends, bellowed on the loudhailer: “There will no landing on Browns Island today, the white-tailed eagles are nesting there.”

The occasion was the 29th anniversary of the charity fly-fishing competition which this year attracted more than 90 anglers. Browns Island is a favourite stopping point for lunch but this year is was important not to disturb the two nesting eagles.

Of course, the focal point of the event is the charity aspect. To date, in excess of €200,000 has been raised for local charities. Each year a different beneficiary is chosen and this year’s organisation was Killarney/South Kerry branch of the Irish Cancer Society.

Accepting a cheque for €6,243, the society’s chairman Eugene O’Sullivan thanked the Lein club for the donation. “The money will support our helplines, nursing care and a myriad of other essential services otherwise not financed by the HSE,” he said.

This year’s attendance was boosted with inclusion of the Irish Trout Fly Fishing Association (ITFFA) team, who will fish the venue in May as part of the home international competition against Scotland, England and Wales.

Conditions could best be described as fair to good with little wind early on, but as the day progressed a brisk northwesterly brought cloud cover and a good wave.

The winning duo of Noel Duane (Cork) and Eddie Shanagher (Clare) opted for the Flesk River outlet and found great success with eight trout for Noel and six for Eddie. “I had a small Blae and Black fly on all day and it worked wonders,” he said. Noel also won this competition back in 2005 with seven fish.

Annamoe Trout Fisheries, situated on the banks of the Avonmore River in Wicklow, is where the media angling group gathered to compete for the coveted Dublin Crystal Perpetual Trophy.

Now in its 12th year, the event embraces members of the media with an interest in angling and, from time to time, new faces do attend and this year was no exception.

It was great to welcome for the first time renowned mentalist Keith Barry, Mara Media’s Hugh Bonner and professional angling guide Paddy McDonnell, from Co Mayo. All three thoroughly enjoyed their day and, in fact, Paddy went on to win the competition with 10 rainbow trout.

Rules on the day were straightforward – barbless single fly, catch-and-release and change to different sections on the hour. Conditions were ideal and the fish cooperated accordingly with 41 recorded and many lost across 12 anglers.

As a mark of respect a minute’s silence was observed for the late Derek Davis who passed away last year. Annamoe was one of Derek’s favourite venues and he rarely missed the media occasion.

Annamoe’s Brian Nally homemade beef stew and curry were devoured in “jig time” and following a few words from Brian, including a sincere thanks to IFI’s Josie Mahon and Des Chew for their organising skills, most competitors received a prize and were high in praise for an enjoyable day.

While the main lake is open all-year (except Wednesdays), a separate children’s fishing pond is open from May to September. Phone 0404-45470 or email annamoefishery@eircom.net.

Two new guides for salmon and sea trout angling on the Gweebarra and Eany Rivers in Co Donegal were launched recently by Inland Fisheries Ireland.

The Gweebarra is a highly productive salmon and sea trout fishery in west Donegal. The river is a spate fishery, containing excellent fly-fishing water over its entire length with numerous holding pools, including the famous Mayo Pool, where the Cloghanagore River enters the main river.

The second guide provides information on the Eany River which drains the Bluestack Mountains in south Donegal and flows into Inver Bay. It too is a spate river system, with peak angling activity coinciding with grilse and sea trout runs from June to September.

Note: The Eany is currently listed for catch and release only, so angling is restricted to use of single barbless hook with worm fishing banned.

The two guides come as fold-out water-resistant leaflets and provide detailed maps of both fisheries, identifying key angling stretches, holding pools and suitable access and parking points. They also provide information on fishing methods, angling regulations and locations at which to obtain permits.

Both the Eany and Gweebarra guides are available from IFI offices in Glenties and Ballyshannon or can be downloaded at http://www.fisheriesireland.ie/Angling/angling-publications.html.

On the Galway Fishery, water levels are finally receding with just four sluice gates open on the weir. There is a run of springers at the moment with four fish landed and four hooked and lost last Monday. Mike Cullina, from Galway, landed a 4.5kg fish on fly, while Longford man Phil O’Donohue had a fine 6.35kg springer on a spinner.

Davy McMurtry, from Coleraine, caught a 4.9kg fish on Tuesday, and on Wednesday Jon Menzies, from Craughwell, had another of 4.9kg. Anglers are meeting fish, and with water levels improving, prospects for good spring fishing are quite good.

The good spring salmon fishing continued on Carrowmore Lake with 24 reported (12 released). The majority ranged between 2kg and 4.5kg, with one exception, Gerry Carolan’s magnificent springer of 7.5kg.

Note: Carrowmore Lake is a brown tag fishery this year. For fishing, contact Seamus Henry on 097-83487 or see www.bangorerrisangling.com.

Slowdown in angling on Corrib

Angling has slowed down on Corrib in recent days with the duckfly finished and olives yet to hatch in significant numbers. Cong Angling Club held their re-fixed Easter competition in which 23 anglers took part with 13 fish weighed in. First place went to David Ryan, Cong, with three fish for 2.2kg. The club is hosting the Annual Mayfly Competition on Sunday, 5th June. For further details, contact 087-635 5876.

In the Oughterard area, Kevin Molloy of Baurisheen Bay Boat hire (087-9604170) hosted visiting French anglers who enjoyed two days of good fishing on a mixture of wet fly and trolling.

On Mask, Ronan Cusack reports that Olives have made their first appearance. Weather remains cold, but good hatches of small cinnamon sedge continue on a daily basis.

Headford angler Conor Ledwith fished wet-flies for two days and finished with eight trout (all returned). Father and son Gerry and Damien O’Brien, Ballinrobe, fished for a day and caught eight fish on wets (all returned). Ronan Cusack and Gerry Moran also had eight, on a combination of wets and buzzer (best 1kg, all returned).

The Tourmakeady AC held the Churchfield Cup catch and release competition on Sunday last. This was won by Liam Conroy with five fish, second was Mick Dunne with four, and John Burke was third with two. Overall, Mask is fishing extremely well and the best is still to come.