Inland Fisheries Ireland call on the public to be vigilant 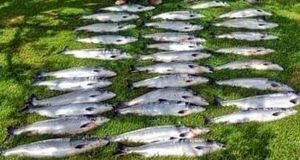 Part of the 98kg of salmon seized by Inland Fisheries protection officers off the Cork Coast earlier this month.

Members of the public and hospitality industries are reminded that it is illegal to purchase or possess illegally caught salmon or sea trout. Only those caught by licenced commercial salmon fishermen may be sold and must bear a colour coded green or white gill tag, or for wild imported salmon, a yellow tail tag.

Likewise, anglers are prohibited from selling salmon or sea trout. Rod-caught salmon must have a blue tag affixed but cannot be sold. Fishery officers carry out regular inspections of premises to deter this illegal trade.

Dr Greg Forde, deputy CEO and Head of Operations at IFI, said: “The risk of targeted netting of salmon at sea remains the highest priority for our protection staff who have seized 15 nets in the South Western River Basin region so far this season. Nationally, a total of 91 nets, measuring 5,300 metres have been seized since the beginning of the year. The value of prompt information from the public who report instances of suspected illegal activity or pollution alerts, cannot be overstated.”

Natural Resources Wales is carrying out a review to better understand the cause of increased algal bloom in the River Wye, Mid-Wales. Water sampling data from the past 12 years is being used to understand trends in water quality and to appreciate the causes of the greater amount than usual in the river this year.

Ann Weedy, Mid-Wales Operations Manager, said: “The review will look at factors that cause algal blooms including nutrient level and changes in land use and agricultural practices. These will then be considered alongside water temperature and river flow factors.”

Bass beach fishing along the eastern coastline is showing good returns of late particularly for those anglers prepared to fish into the darkness on the rising tide. According to reports, the most productive beaches include Donabate and Portrane and further north to Laytown and Bettystown.

Dublin angler, David McGregor landed a beauty of 70cm last Tuesday evening while fishing Laytown beach on ragworm, which he sportingly returned. Anglers are reminded of the bye-law which limits two bass per angler within any 24-hour period and a size limit of 42cm. Catch and release is encouraged.

Anthony Downey, a school caretaker from Drimnagh, took about 20 minutes to land a magnificent bass which he, and other anglers, guessed weighed nine to 10lbs.

He said he had only purchased the new fishing rod the previous day and got some lugworm to try it out. After having pictures taken and being congratulated by onlookers, he put it back in the water.

A salmon on the troll

Lough Currane in Waterville, Co Kerry continued to produce some nice baskets of sea trout on the drift when conditions warranted, plus a salmon on the troll, according to Vincent Appelby. In the past week on the upper lake, Lough Derriana has provided a few nice brown trout plus a fine 4lb seatrout.

1 James Ryan injury could open the door for Ryan Baird
2 Brentford eye €178m windfall with Premier League promotion
3 Ken Early: Frank Lampard’s problems start at number one
4 All in the Game: Klopp gets the last laugh in quiz show
5 Lockdown hiatus may afford way back for Waterford hopefuls
Real news has value SUBSCRIBE