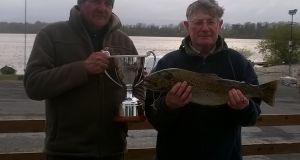 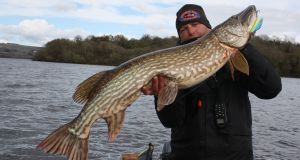 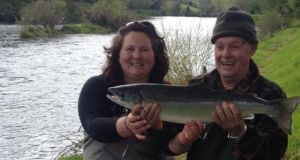 Mario Corona from Italy with his ‘birthday’ salmon from the Blackwater Lodge Fishery, with Glenda Powell

The Angling Trades Association (ATA) in Britain has reacted strongly to speculation about the number of bass that anglers catch and sell. Despite their inability to offer a scrap of evidence, some commercial fishing organisations have been attempting to highlight the illegal practice and exaggerate its likely importance.

Now the association is calling for independent research to uncover the facts.

The topic of illegal fishing and unlawful sale of catches were key subjects discussed during a recent meeting between the Angling Trust (AT) and several national fishing organisations.

Despite agreement to denounce all forms of illegal fishing, there remains the spectre that the restrictions on anglers’ rights to retain the bass they catch could be used as a spearhead for the imposition of catch restrictions on other marine species caught by recreational anglers.

ATA’s chairman Naidre Werner said: “The ATA has been steadfast in its support for the AT’s moves to build bridges with the commercial fishing sector. However, Government policies must be evidence-based and not founded on speculation.

“We are urging the Government to immediately initiate research to examine the extent of any ‘problem’ of illegal fish sales. This will help inform future policy decisions and enable organisations representing the recreational sea angling industry to initiate action to stamp out the practice.”

“The ATA is a strong supporter of the principle of sea fishing sustainability, and it stands squarely behind the campaigns to ensure that our sea fish stocks are available for enjoyment by recreational anglers.

“Policies based on rumour would jeopardise not just anglers’ sport but also affect the livelihoods of charter-boat skippers, coastal hotels and B&B’s, tackle shops, tackle manufacturers and all the other industry sectors who rely on plentiful fish stocks and the freedom to catch them.”

David Mitchell, AT’s campaign manager, said: “Selling fish from an unlicensed powered vessel is a form of illegal commercial fishing which damages fish stocks, damages licensed fishermen’s businesses and damages the reputation of the £2bn (€2.5bn) recreational angling sector which gets unfairly tarnished by these allegations.”

Judge McCarthy heard evidence outlined by fisheries officers relating to a patrol near Lough Inagh, Co Clare. Four pike were seized, three of which measured over the size limit. Under the pike bylaw it is an offence to have more than one pike and/or have a pike greater than 50cm in one’s possession.

Ballinrobe & District Anglers held the David Walsh Memorial two-day competition over the bank-holiday weekend. The event was again a huge success with excellent fishing and supported by 84 anglers from across the country.

Olive hatches have been sporadic, but hopefully will improve as the weather is set to improve.

Good day out on Corrib

In the Oughterard area, 24 rods participated in the International Angling/Golfing competition, catching 45 trout over the two days for 25.4kg. The winning duo were Gerry Dixon (Oughterard) and Johnny Flaherty (Renvyle) with 11 fish.

“I will never forget the look on his face during the fight, and the relief when he got it into the net,” fisheries proprietor Glenda Powell said.