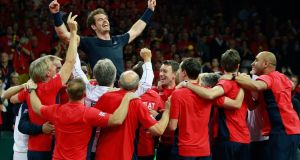 Britain after a wait of 79 years. It was not as straightforward as the 6-3, 7-5, 6-3 victory over Belgium’s best player, David Goffin, might suggest, but Murray cared not a jot. He had done his duty, as everyone knew he would.

Kyle Edmund had played a tangential role on his debut, perhaps sowing doubt in Goffin’s mind by taking the first two sets in the first rubber of the tie on Friday. Murray dismissed Ruben Bemelmans, his brother Jamie overcame the jitters to partner him to victory in the doubles and, as was almost pre-ordained, it all came down to Andy. It always does. As long as he plays, it always will.

Murray is only the third player since John McEnroe in 1982 and Mats Wilander the following year to win eight Davis Cup singles in a calendar year. He is also just the fourth player to win 11 rubbers, having taken three doubles points with Jamie, since the world group began in 1981.

The mood, affably belligerent on the first two days, was ramped up from the first game, as whistling hecklers stole their split second of assumed glory by twice interrupting Murray’s ball toss. It did not seem to bother the focused Scot.

Fans who had paid handsomely for seats showed a reluctance to sit in them. They were on their feet between nearly every point, screaming with such manic intensity it was impossible to make out a word of their exhortations.

The British oompahed their double bass and banged their drums; the Belgians swayed as they waved their big red rubber fingers, like some reincarnation of Kenny Everett. It was two-all after 20 minutes of the match. Both sides had plenty to cheer about.

However, there is a delineation to be made between passion and boorishness; some of the cynically timed whistling was absurdly childish.

Amid all the mayhem, Goffin had to save an early break point but settled into a solid rhythm to stay with Murray. However, after half an hour it was clear the determined Belgian was finding it tough to stay in the longer exchanges, opting for the high-risk option of going for the lines, ball in hand and off the ground.

Murray would not budge from his disciplined attrition, waiting for his moment rather than forcing it – and it came on the half-hour, the Scot unfurling an unreachable backhand for 4-2. After soaking up some resistance, he served out with a forehand in the ad corner.

The second set was following a similar pattern to the first until Murray hunted down a lob to pass delicately for break point in the third game.

At one crucial point in the game, Murray seemed incandescently upset with his brother Jamie for standing in his sight-line at one end of the court, but the tiff subsided when the elder Murray moved as he was told. There was a lot of emotion out there.

Murray’s serve was his bedrock, returning 70 per cent success on first and second efforts, and Goffin did not have the power or precision to reply in kind. He had suffered the same fate in their previous two meetings.

This was an unusually fast shale-based surface, anyway, as suited to Murray’s flat ground strokes as to Goffin’s slower, teasing spin. He will have recognised also that Murray has grown in confidence on clay since beating all-time master Rafael Nadal to win the Madrid title during the summer. Murray held to love in the sixth game and Goffin’s boyish head dropped ever so slightly.

But he was hanging in there. Some of Belgium’s sporting royalty were here, most prominently former world number one Kim Clijsters. The roar that greeted his hold for 4-3 was bigger than anything he can have experienced on tour.

Ahead in the serving cycle, he was not out of the fight just yet, but he could not afford even the slightest dip in his level. Murray hit fifth, sixth and seventh aces to hold to love in the eighth game and the pressure was mounting on his opponent, who found one of his own at the next time of asking as Murray strove for a breakthrough.

Goffin, advancing at every half-chance, botched a drop shot en route to deuce in the 11th game and trembled in the stroke to put a closing forehand low into the net again, giving Murray the chance to serve for a two-set lead.

After another tight struggle, he produced a wondrous forehand cross-court winner to finish the job, raising his fist in celebration to those parts of the crowd still on their feet. Not many were Belgian.

The atmosphere, which had raged for two hours, briefly settled into resignation in large parts of the hall but not for long.

Only once in his career had Murray lost a match from two sets up, against David Nalbandian long ago. He was not about to do so again – although, when Goffin secured his first break of the match, in the second game of the third set, British hearts raced a little faster. Goffin could not hold but, after two hours and 40 minutes, with the finish line tantalisingly close, Murray had to save break point to level at three-all.

He gritted his teeth, stared down the barrel at Goffin and stuck a rose in it, breaking him to love. He held through deuce for 5-3. He scrambled two break points. The crowd leaned forward. He lobbed the winner. He fell to the clay. He cried, he laughed, he hugged, he cried again. – (Guardian service)