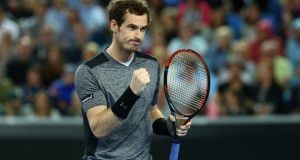 Andy Murray moved into his 20th consecutive Grand Slam fourth round as the Scot dug deep at the Australian Open to beat Portugal’s Joao Sousa.

Murray was far from his fluent best on Margaret Court Arena but the world number two was clinical in the crucial moments as he sealed a 6-2 3-6 6-2 6-2 victory.

The British number one played on apparently unaware that his father-in-law Nigel Sears had been taken to hospital after collapsing on Rod Laver Arena.

Murray will now face either Bernard Tomic or John Millman, both from Australia, in the last 16.

Sears, the coach of Ana Ivanovic, had been watching the Serb’s third-round match against Madison Keys when he suddenly fell ill.

When Murray completed victory, Sears was undergoing tests with a cardiologist but Jamie Murray said the 58-year-old was “conscious, talking and sitting up”.

At the end of the contest, Murray departed the arena immediately, rather than doing a customary on-court interview. It was also announced he would not be attending a post-match press conference.

The Briton had struggled for his usual rhythm during the match as he consistently mistimed his forehand and was regularly forced to rely on his second serve.

Sousa, however, was unable to capitalise as he carved out a number of early opportunities but each time watched Murray momentarily find his best to survive.

A scintillating cross-court forehand from the Scot saved a break point in the third game and then two irretrievable serves diverted another in the fifth as Sousa failed to make his strong start count.

It proved costly as Murray found his groove at 3-2, brilliantly hunting down and then flicking away a Sousa drop-shot to break the Portuguese and move two games clear.

Frustrated, Sousa wavered from his baseline game, which suited Murray, who picked him off with ease and broke again to clinch the opening set.

The score, however, flattered the British number one and it was little surprise that Sousa, composing himself again, nicked the first break in the second when a Murray backhand flew long.

Sousa had a foothold and as Murray huffed and puffed, his opponent broke again to seal the set and level up.

When Murray appears most exasperated he often produces his most inspired tennis and that was the case in the third set, as he used his superior touch, craft and speed to outmanoeuvre Sousa.

Two breaks of serve put the Briton back in front and he carried his momentum into the fourth with another break at 2-2.

Sousa was suddenly on the back foot and he never looked like recovering as Murray raced away, breaking again at 5-2 before sealing victory in two hours and 38 minutes.

“I thought I struggled. At the beginning I think he was extremely aggressive, very intense,” Murray said in a statement provided to journalists.

“He was getting into positions to dictate a lot of points with his forehand. Once I started to hit the ball a little bit cleaner towards the end of the match I was able to get him in his backhand corner and dictate more of the points.

“I just tried to keep fighting. At the end I was actually hitting the ball well and felt better at the end. It was good to get through that one.”

Elsewhere Stan Wawrinka admits he is struggling with illness after the Swiss beat Lukas Rosol in the third round.

Milos Raonic also enjoyed a comfortable passage into the last 16 as he sailed past Serbia’s Viktor Troicki 6-2, 6-3, 6-4.

After the match, Raonic dedicated his win to the victims of a shooting at a school in Saskatchewan, Canada on Friday, which left four people dead and several more injured.

“It was a difficult day back home,” Raonic said. “There was a shooting in a high school in a small town. I give my thoughts to that community, the families, the students and the school affected.

“We wish you all the best. This win was for that community and a speedy recovery. All of Canada and the world is behind you.”