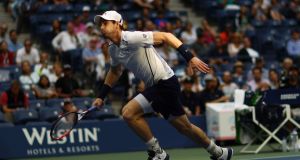 Scotland’s Andy Murray chases a return against Paolo Lorenzi of Italy during their match at the US Open. Photograph: Eduardo Munoz Alvarez/AFP/Getty Images

Flummoxed and frustrated by wily veteran Paolo Lorenzi for two sets, second seed Andy Murray changed tactics and beat the 34-year-old Italian at his own game to advance to the US Open fourth round on Saturday.

Murray was moping and muttering to himself as he pressed for winners against the steady Italian and piled up unforced errors before deciding to patiently play long rallies that enabled him to secure a 7-6 (4) 5-7 6-2 6-3 win.

World number two Murray committed 47 errors in the first two sets, including 31 off his forehand, and converted only four-of-12 break points before finding his form in the third set.

The 40th-ranked Lorenzi put up a gritty fight despite coming off a gruelling five-set, five-hour win over French 30th seed Gilles Simon in his second-round tilt.

The Scotsman’s harder than expected three-hour 17-minute victory kept his golden summer moving forward after triumphs at Wimbledon and the Rio Olympics.

Lorenzi is also enjoying a stellar season, logging his first victory ever on the ATP Tour, becoming the oldest first-time champion by winning at Kitzbühel, and adding two semi-finals and a quarter-final to his credit.

“I stopped rushing in the rallies,” 2012 US Open winner Murray said in an on-court interview. “I was making quite a few unforced errors.

“He’s an extremely solid player and doesn’t give you many cheap points. I was trying to get cheap points, I was going for too much.

“When I slowed things down and waited for the right shot to go for, my unforced errors went down, the winners went up and the scoreboard started working in my favour as well.”

Murray advanced to a fourth-round clash with 22nd seed Grigor Dimitrov of Bulgaria, a 6-4 6-1 3-6 6-2 winner over Joao Sousa of Portugal.

Eighth seed Dominic Thiem was serenaded by the crowd as he celebrated his 23rd birthday with a gruelling 1-6 6-4 6-4 7-5 victory over Pablo Carreno Busta of Spain in the third round.

The Austrian was pushed hard, especially in the fourth set, but held on to seal a victory which was followed by a rendition of Happy Birthday by the Grandstand Court fans.

“It was a big pleasure to play on Grandstand on my birthday, against a very tough opponent,” Thiem said.

“I had a bad start so I tried to focus on the second set. Then (in the fourth set), I was twice up a break and he played amazing games to break back so I am very happy to win.”

The victory equals Thiem’s previous best performance in New York and he now plays former champion Juan Martin del Potro for a place in the quarter-finals.

When former champion Del Potro began his latest comeback in March he said he was playing for fun after three operations on his wrist.

Six months on, with an Olympic silver medal in the bag, the Argentine beat 11th seed David Ferrer of Spain 7-6 6-2 6-3 to reach the fourth round for the first time since 2012.

“I didn’t expect to be in the second week of this tournament,” the 2009 champion told reporters .

“I’m surprising the guys on tour, my colleagues. That’s great because I’m seeing I can be dangerous in the future once again.”

Having climbed back to 142nd in the rankings, Del Potro needed a wildcard to get into the US Open.

But his win over Ferrer showed everyone that he may even be a contender for the title.

“The best players on tour are talking good things about me,” Del Potro said.

“If they see something good in my game, that’s important, because I’m showing a good game at the moment. (Hopefully) the future will be better, even better than today, and that’s important.”

Del Potro, who does around three hours of rehab on his left wrist every day, said Thiem will be favourite.

“It all depends on my physically, on my body, on my game,” he said.

“If I play like this today, I will maybe have chance to do a great match against him.

“He’s playing really well. He’s very dangerous. His backhand is so good. His movements are really fast. It will be an interesting match for me.”

3 Liverpool leaning on Salah more than ever right now