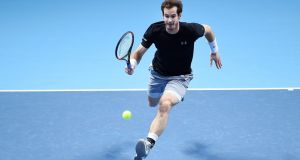 Andy Murray in action against David Ferrer during their singles Ilie Nastase group match at the ATP Tour finals tournament at the O2 Arena in London. Photograph: Andy Rain/EPA

It’s not often that Andy Murray smiles on court, but he had good reason to be in light-hearted mood during his straight-sets win over David Ferrer to open his campaign at the ATP World Tour Finals yesterday.

There was the odd blip, and the odd funny moment – as when he banged the net with a botched forehand in the second set and, following up, put away the rebound for a pretend winner. He could not hide his amusement and spun a grin towards his box, where his wife, Kim, beamed back at him, heavily pregnant and clearly enjoying the occasion a lot more than either of them did last year.

A year ago, Roger Federer embarrassed Murray probably more than he had been at any time in his career, beating him 6-0, 6-1, an experience he claims did not traumatise him but inspired him to find solutions to what went wrong.

The Murray machine has been in excellent working order in 2015 and clicked pleasingly again here as he took an hour-and-a-half to beat Ferrer 6-4, 6-4.

Looking, as ever, every inch like a cocker spaniel dragged in from a storm, the loser’s woebegone mien reflected his frustration. It would seem to be the Spaniard’s lot to suffer on a tennis court, especially against Murray. Their styles mesh and grind perfectly, resulting in long rallies and much running.

This opening encounter was not one of their epics, but there was struggle and angst none the less. Murray won 64 points to 49, a fair measure of his dominance, and his serve, although not at the level he has hit earlier in the season, was sound at 60 per cent.

Murray is adamant he will give 100 per cent to his effort here before switching back to prepare for the clay-court challenge in the Davis Cup final against Belgium in Ghent at the end of the month, and he did not stint against Ferrer.

His movement was impressive and his ball-striking clean. If he plays like that for the rest of the round-robin in a group that features Stan Wawrinka and Rafael Nadal, he could find himself in the semi-finals at the weekend.

Murray’s victory means that Federer must win all his matches this week to end the year as the world number two.

“I served bad at the end of the first set and also in the second set,” admitted Ferrer. “When the serve doesn’t work against top 10 players, it’s difficult to win.” Guardian Service