Andy Murray fails to impress in victory over Andrey Kuznetsov 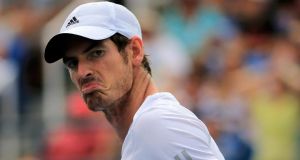 Andy Murray had another frustrating afternoon on the Louis Armstrong Stadium court but did enough to defeat Andrey Kuznetsov and reach the fourth round of the US Open.

There was not the same drama as there had been in round one, when he cramped against Robin Haase and might have lost, but Murray again found himself embroiled in a fight having appeared in total control against a player ranked 96th in the world.

He at least finished the match relatively strongly, recovering from dropping the third set to clinch a 6-1 7-5 4-6 6-2 victory after two hours and 35 minutes.

Much stiffer tests lie ahead though, with Jo-Wilfried Tsonga his likely next opponent, and Murray knows he will not be able to afford such lapses if he is to figure in the latter stages of the tournament.

Murray, who had never played Kuznetsov before, said: “I got off to a good start, which obviously helped. I had a bit of a cushion when he started to get back into the match.

“He played some good stuff at the end of the second and all the way through the third. I’m happy I stayed solid. It was tough.

“I feel better than I did in the first match. Conditions are a little bit more pleasant. I made sure I ate properly and drank properly.”

Kuznetsov won the junior title at Wimbledon in 2009 but has taken time to make his mark in the senior game.

He beat David Ferrer in the second round at Wimbledon and knocked out Fernando Verdasco at the same stage here.

Novak Djokovic continued to look the man to beat as he cruised into the fourth round with a comfortable victory over American Sam Querrey.

Djokovic has not been tested in any of his matches so far and needed just an hour and 25 minutes to dispatch Querrey 6-3 6-2 6-2.

Querrey’s serve is his biggest asset but Djokovic was all over it, the American winning just 23 per cent of points on his second serve and only 57 per cent on his first.

Coming into the tournament, Djokovic admitted he did not not know how being away from his pregnant wife would affect him but any rivals looking for a lack of focus will have been sorely disappointed.

Fifth seed Milos Raonic ended the run of Victor Estrella Burgos in a tight match that was decided by three tie-breaks.

Estrella Burgos’s rise into the top 100 at the age of 34 has been one of the best stories of the season but even his enthusiastic band of fans from the Dominican Republic could not propel him to victory this time.

In the fourth round Raonic will play 10th seed Kei Nishikori, who came into the tournament short on matches because of injury but has been impressive and beat Leonardo Mayer 6-4 6-2 6-3.

Wimbledon champion Petra Kvitova became the latest big-name casualty in the women’s draw at the US Open with a shock third-round loss to qualifier Aleksandra Krunic.

Kvitova much prefers the quiet of Wimbledon to the hustle and bustle of New York and she has never been beyond the fourth round at Flushing Meadows.

Her first two performances had raised hopes that she could break her hoodoo this time, but she could not break down the stubborn Krunic and lost 6-4 6-4.

The 21-year-old Serbian, ranked 145th, had never won a Grand Slam match before this tournament, but followed up her upset of Madison Keys with an even bigger scalp.

Kvitova, who had her right thigh heavily strapped, looked to have turned things around when battled back from 4-2 down to 4-4 in the second set, but Krunic did an exceptional job at making the Czech hit one more ball.

Krunic also came up with some terrific shots of her own, showing remarkable composure for a player who had never taken a set off a top-30 player prior to this tournament.

When Kvitova sent her final forehand wide, the Serbian fell to the ground in celebration.

There are now only five of the top 10 women’s seeds left in the tournament, with Kvitova joining Simona Halep, Agnieszka Radwanska, Angelique Kerber and Ana Ivanovic in falling early.