All Irish hopes now rest with Commercial at Henley Regatta

Quadruple scull team recover to remain in the running for honours 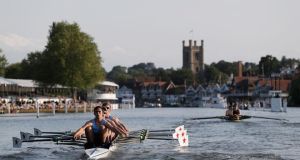 They caught a boat-stopping “crab” (missed stroke) in the early stages of their race, but Commercial’s quadruple scull are the sole remaining Irish club crew in contention at Henley Royal Regatta.

The exits of the UCD eight and four and the Belfast Boat Club and Trinity fours came in varying fashions, but all have an enforced rest, while Commercial carry the flag in the Prince of Wales Cup today.

The crew of Fionnan Groome, Albert Maher, Colm Dowling and Michael Maher led in the very early stages before their “mishap” halted them. Remarkably, they got going again and built enough speed to pass the London composite crew of Poplar Blackwall and District RC and Anglia Ruskin BC.

By half way they had crushed their challenge and went on to win by one and three-quarter lengths.

Maher (40), who has won at Henley three times (1996, 2003 and 2005), said the edge in experience had helped the Irish. They take on California Rowing Club today, touted as the United States quadruple for the World Under-23 Championships.

“We can afford no mishaps,” said Maher. He believes there is more speed in the boat. “I think we can win,” he said.

The fate of UCD’s eight in the Temple Cup was decided early. The bigger St Petersburg crew led by the quarter-mile mark, and established such an advantage by halfway they could ease off. They won by four lengths.

The UCD Visitors’ four had more realistic hopes, but were well beaten by Harvard A. The Irish crew were heavier but Harvard took control early. Belfast Boat Club showed well early against Union Boat Club of the US in the Britannia for club coxed fours, but the American crew won by three lengths.
l Details in SPORTS ROUND-UP