Defeat ends Hermes’ hopes of a quadruple this season 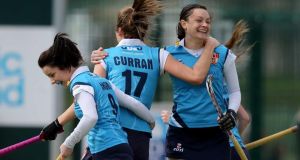 Aine Curran celebrates what proved to be her winning goal against Hermes in the Irish Senior Cup Final at the National Hockey Stadium, Belfield, Dublin. Photograph: Ryan Byrne/Inpho

The Elks had only once previously reached the final – in their former guise of the Ulster College of Physical Education in 1971 – but were good value for their title victory.

Irish skipper Megan Frazer led the charge, first from centre forward before dropping into midfield once the lead had been taken. For Ireland, she usually operates from sweeper but she was freed to take on the more advanced role by the return of Stephanie Jameson, Canada’s most capped player, who made her first appearance of 2015 for the club.

Frazer was duly the boss of the first half, terrorising the Hermes defence at the head of a full press, and drew some stunning blocks from Emma Gray.

It bounced up for former UCC woman Aine Curran who controlled in mid-air before volleying home on her reverse.

For Hermes part, Christine Quinlan was excellent in defence, mopping up numerous attacks but they were unable to get the requisite momentum going forward. Elks continued to press forward in a slightly staccato second half. Their corner count eventually ran up to 11 but proved ineffective, leaving them susceptible to a sucker-punch.

That almost came three minutes from time when Caitríona McGilp’s snap shot shaved the outside of the post.

They also had a couple of corners closed down but they were fleeting moments as the Elks deservedly took down their first title.

1 CVC cuts Six Nations offer by half to €165m as talks continue on new deal
2 Game Changers: Living beyond fear puts Alex Honnold above all others
3 Jack Charlton era made GAA sit up and realise its greatest strength
4 Game Changers: Gary O’Toole took a stand when others turned their heads
5 Alain Rolland to step down from World Rugby position
Real news has value SUBSCRIBE