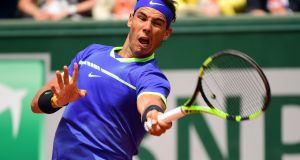 Rafael Nadal of Spain in action against Roberto Bautista Agut of Spain during their men’s singles 4th round match during the French Open at Roland Garros in Paris. Photograph: Caroline Blumberg/EPA

Rafael Nadal is looking every inch the champion he was here five years ago and it is clearly going to take someone playing special tennis to stop the Spaniard winning his 10th title at Roland Garros.

With all the generosity one could muster, that person is unlikely to be PabloCarreno Busta, his Spanish friend, who took 4hr17min to defeat Milos Raonic over five gruelling sets on Sunday for the honour of playing Nadal in the quarter-finals on Tuesday.

When Nadal won his seventh championship in 2012, he gave up just 19 games on his way to the last 16. On Sunday he raced into the quarters ahead of the field in a mere 1hr51min, dismissing another Spaniard, Roberto Bautista Agut, 6-1, 6-2, 6-2. This time, his first four matches have cost him 20 games.

Those two maybes are about as far apart as the players’ professional records. Nadal has won three tournaments this year and 72 in his career; Busta has won three titles in the eight years he has been playing tennis for a living.

Having turned 31 on Saturday, Nadal, statistically and by common agreement, is playing tennis as awesome as when he was at or near his peak. In 2012, he won four titles and 42 of his 48 matches; this year he has won 36 of 42.

If Nadal defeats Busta, he will post his 100th win in best-of-five matches on clay, against just two losses. Both of those were here, against Robin Soderling in 2009 and Novak Djokovic two years ago. There cannot be a record like it in sport.

While that blizzard of statistics might be a lot to take in, pity the plight of Agut, who had to soak up 31 clear winners in under two hours, 18 of them ripped on that forehand by the left wrist that last year gave up on Nadal after two matches.

He is hitting the ball with as much venomous top-spin as he has done in a long while and he is without question the most dangerous player remaining in the draw.

“Probably I didn’t play as well as I did the other day,” he said later, which is not as arrogant as it sounds. “I made a few mistakes, but not important ones. In general terms, I played well. The most important thing for me is I was able to play with no injuries and not too many problems since [Carlos Moya joined his team]. We have been able to practise as much as we wanted and the way that we wanted.”

There have been suggestions that his uncle, Toni – who will give up his main coaching role at the end of the year – admonished Nadal at the start of the season for what he perceived to be a lack of motivation.

What is obvious is that Busta, who has had a decent season and a solid tournament, will find this match tougher than any of their previous three, all of which he lost. Raonic kept the world No 21 on court to contest 382 points, and the Spaniard said later: “It was really tough. I suffered, but I enjoyed it. And, of course, you enjoy it more when you win. He played very well on match point [the Canadian saved six of them]. The rallies were very long. He was defending well all the time.

“If I didn’t think I had a chance, I would not play. Of course, it will be difficult because Rafa is the best player on the surface in history. I am maybe tired, but I have one day off. We will see on Tuesday. He’s a really good friend. It will be a really special match for me.”

The short odds are it will be a special occasion for Busta but not a match that will change his career.

Nadal told Spanish journalists: “I fully respect each opponent and I respect the tournament. Just because things go well for you, it does not mean things are going to continue like this. You have to be ready so that you can react to bad moments that might happen.”