A weekend of mixed fortunes for Irish boxing 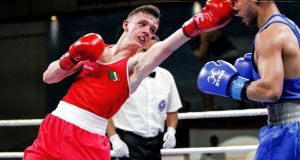 Though back to winning ways Katie Taylor will nonetheless be stung by her defeat at the Rio Olympic qualifying event in Turkey. Her win over Svetland Staneva brought to an end a weekend where Brendan Irvine became the fifth Irish boxer to secure a place in this summer’s Olympics and in the professional ranks Patrick Hyland failed to take his opportunity to claim the WBC featherweight title in the USA.

Irvine qualified by a unanimous decision win over Bulgaria’s Daniel Asenov. Coming off a semi-final defeat to Armenia’s Narek Abgarayan, the Belfast teenager boxed cleverly against an aggressive opponent doing enough for the judges to give it to him unanimously. Irvine joins Michael Conlan, Paddy Barnes, Joe Ward and Steven Donnelly on an Irish team of five, who have made it to Rio.

Taylor comfortably won her box off bout against Staneva, responding magnificently to the body blow of losing her lightweight semifinal to Yana Alekseevna and an automatic place in the Olympic Games. Taylor had the bout wrapped up by the third round before going on to win it 3-0(39-37; 40; 35, 40-36).

The Azeri boxer, Alekseevna, won her tight final against the teenage Italian Irma Testa after the judges called it 38-38. She may not have to wait too long before she faces Taylor again. The World Championships begin in Astana in May 19th with the seifinalists there booking a place in Rio.

At the last World Championships, which Taylor won in Jeju, South Korea there was bizzarely no seeding, which brought into question why they have world rankings. If that is repeated in Kazakhstan the Irish Olympic champion could face Alekseevna in the early rounds of the championship.

In Foxwoods Resort in Mashantucket, Conneticut, Patrick Hyland was stopped by Gary Russell jnr in the second round. The Tallaght fighter had hopes of emulating former featherweight champion, Barry McGuigan in bringing home the WBC featherweight title but came up against a class opponent in Russell.

Known for his hand speed Russell had Hyland on the canvas three times before the bout was brought to a halt at 1.33 of round two. Russell was fighting for the first time since March of last year when he beat Jhonny Gonzalez.

But there was no ring rust in evidence with the American landing at will on Hyland, a right hook early in the second round putting the Irishman on the canvas for the first time. Hyland got up but was unsteady and the 27-year-old southpaw, who had superior speed, accuracy and power, quickly landed another right hook and Hyland went down again. The referee gave Hyland a standing count and asked him if he was okay to continue and allowed the bout to resume. After a third knock down the compromised Hyland was stopped.