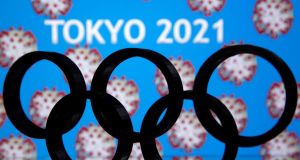 A 3D printed Olympics logo is seen in front of a display for “Tokyo 2021”. Photograph: Dado Ruvic/Reuters

For all their apparent dithering and indecision, the agreement to postpone the 2020 Tokyo Olympics into 2021 is already looking like the easy part. The reality and impact of unravelling and slowly beginning the Games all over again certainly won’t be.

Despite giving themselves four weeks to make the decision as recently as last Sunday, just before Tuesday lunchtime the International Olympic Committee (IOC) and the Tokyo 2020 organisers issued a joint statement.

In the present circumstances around the Covid-19 pandemic and based on the information provided by the WHO, “the IOC President Thomas Bach and the Prime Minister Abe Shinzo of Japan have concluded that the Games of the XXXII Olympiad in Tokyo must be rescheduled to a date beyond 2020 but not later than summer 2021, to safeguard the health of the athletes, everybody involved in the Olympic Games and the international community”.

Just like that. While universally welcomed and supported by athletes and member federations alike, the decision to postpone is clearly not indefinite: if the rescheduled dates can’t be agreed for the summer of 2021, and that may still depend on the circumstances around the Covid-19 pandemic, then it appears cancellation is the only other option.

The 2020 Summer Games were set to open on July 24th, followed by the Paralympics on August 25th; on the back of the IOC agreement, the International Paralympics Committee (IPC) also agreed their Games would take place at a date beyond 2020, but again no later than the summer of 2021.

Whatever about team and athlete qualification, ticket sales, sponsorship and other endorsements already built into the 2020 Summer Games, the decision to postpone into next year also has an immediate knock-on effect on other global championships already booked in for the summer of 2021, including the World Aquatics and the World Athletics Championships, which for obvious reasons of conflict are now staged in non-Olympic years.

There’s no direct conflict with the 2020 European football championships, already moved to the summer of 2021, but a backlog of other sporting events including golf and cycling and may yet come into consideration, at least when it comes to qualification.

The 2021 World Aquatics Championships, which include swimming, diving and water polo, are scheduled for July 16th-August 1st, 2021, also in Japan, in Fukuoka. The 2021 World Athletics Championships are scheduled for August 6th to 15th in Eugene, Oregon. It’s possible that Tokyo could look at a late spring Games in 2021, beginning in late April or early May, when conditions would be more favourable that July and August.

World Athletics said it would work with the IOC to ensure the hosting of the World Athletics Championships on alternative dates “including dates in 2022” with Fina, the governing body of swimming, also “considering the importance of athlete well-being and maximizing opportunities for aquatics stars to compete at the highest level”.

Should they postpone into 2022, however, that in turn could have a knock-on effect on the 2022 European Athletics Championships, already booked in for that summer in Munich, and the 2022 Commonwealth Games, set for Birmingham.

It’s unprecedented in every sense – not just in the face of a global pandemic such as the coronavirus. The Olympics have been cancelled before, although only after the outbreak of World War – firstly in 1916, when the summer Games were scheduled for Berlin before all hell broke loose, with plans for both the summer and winter Games of 1940 and 1944 also shelved due to the millions of deaths and casualties of the second World War. Never have they been postponed like this.

For the Olympic Federation of Ireland (OFI), like the vast majority of Irish athletes already qualified or attempting to qualify for Tokyo, the decision to postpone makes perfect sense.

“This is the right call given the times that we are in,” said OFI chief executive Peter Sherrard. “Nonetheless we recognise it was a difficult call for Japan to make, and we are looking forward to working with the IOC and countries all over the world to make Tokyo 2021 a poignant moment for the whole world once these difficult times are over.”

The focus now, says of the OFI, is protecting and safeguarding Irish athletes over the coming months, “and ensuring that they can bounce back to full training and be in peak condition for a successful Games in 2021”.

The OFI had already secured a number of sponsors around 2020, including FBD Insurance, Circle K, Indeed recruitment and Adidas, plus a deal with Qatar Airways to fly every Irish athlete business class to Tokyo. However the IOC does have a rainy-day for situations such as this, a $897 million (€833 million) reserve fund to help finance global sports, established as a backstop for international sports federations that rely on the IOC to balance their budgets.

The IOC made $5.7 billion (€5.3 billion) (in its last four-year Olympic cycle, which included the 2016 summer Games in Rio de Janeiro and the 2018 winter Games in PyeongChang, South Korea. Of that total, 73 per cent came from broadcast rights and 18 per cent from sponsors.

Tokyo’s overall Olympic overall budget skyrocketed from $7.3 billion (€6.8 billion) at the time of the bid to more than $26 billion (€24 billion), according to an audit by the Japanese government, projections that an outright cancellation could cause the shrinking of Japan’s GDP by 1.5 per cent.