New CEO for FAI unlikely to be appointed for several months, staff told 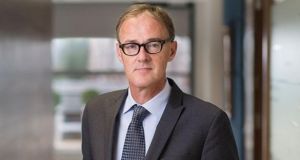 Incoming chairman Roy Barrett is said to favour former Ireland striker Niall Quinn for the cheif executive post but he has ruled himself out.

The Football Association of Ireland is unlikely to appoint a new chief executive for several months, staff have been told.

The position has been open since John Delaney stepped down to become executive vice-president in late March, before leaving the organisation as more details emerged about his salary and the terms of his employment.

Incoming FAI independent chairman Roy Barrett is understood to have told staff at a meeting this week that the position may not be filled for between six and nine months. The role is currently effectively being performed by FAI vice-president, Paul Cooke, on a voluntary basis, titled as executive lead.

John Foley was expected to take up the reins as chief executive last December following a period when the chief executive’s role was taken over by Noel Mooney, who was installed on secondment from Uefa as general manager for six months. Prior to that, chief operating officer Rea Walshe held the position on an interim basis.

Mr Foley’s appointment was widely seen as being rejected by Minister for Sport Shane Ross, who felt he had too many ties to the old Delaney regime. It is understood that recruitment consultants were approached before Christmas with a view to filling the role on a full-time basis. Such a process would include interviews prior to any ratification by the board.

Mr Barrett is said to favour former Ireland striker Niall Quinn for the post, although the ex Arsenal and Sunderland front man has ruled himself out of the running, saying he would prefer a voluntary, ambassadorial role focused on renewing and expanding the grassroots of the game in Ireland. The two men have previously worked on plans to reform the FAI together, both prior to and following Mr Delaney’s exit from the association.

Insiders also expect that Mr Cooke would be interested in the chief executive’s role, however he is yet to make his intentions heard. The post would likely attract significantly less than Mr Delaney’s salary, which came to some €360,000 per year. He also struck generous bonus and pension deals for himself, which the association drew a line under with his exit package earlier this year.

The FAI will meet with European football’s governing body next week amid renewed optimism that a deal can be struck between Uefa, the FAI’s bankers, Bank of Ireland, and the Government, to ensure the medium term survival of the association. Uefa will also meet Mr Ross for talks on the future of the association on Tuesday.

1 Owen Doyle: Creeping professionalism of schools rugby a threat to the game
2 Champions Cup: Leinster will meet Saracens on Saturday evening
3 Ole Gunnar Solskjær insists he is up to the challenge at United
4 Coco Gauff pulls off biggest shock yet by beating Naomi Osaka
5 Matt Williams: Expect the unexpected in rugby’s greatest tournament
Real news has value SUBSCRIBE
Here is your handy guide to sport on television this week