Alas, yesterday’s All-Ireland hurling semi-final at headquarters didn’t live up to the billing 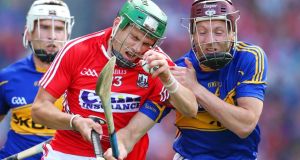 A testing Sunday, that. From Croke Park to Stade Jean Bouin to Croke Park to Stade Jean Bouin and back again, and as ever you end up addled, half hearing Marty Morrissey congratulating Tipp for finishing third in the women’s rugby World Cup and TG4 hailing France for reaching the All-Ireland hurling final and Cyril Farrell describing the French scrum as “savage, like”.

Fourth it was, then, for the Irish team, that win over New Zealand one of the year’s lovelier sporting spectacles, the whole shebang brought to us by TG4. Caps doffed.

Marty, though, missed it all, him being on duty at Croke Park, and quite up for the meeting of Tipp and Cork.

Michael Duignan, sitting beside him, possibly lifted his mic to his lips on several occasions, only to lower it on to his desk again as Marty took us through the epic nature of the two counties’ rivalry.

“Part of the beauty and mystique of the GAA world is the intense rivalry that exists between neighbouring parishes, towns and villages. Which, in fact, is the mirror image of what we see at county level with Dublin and Meath, Galway and Mayo, Derry and Tyrone in football, and there’s Kilkenny and Wexford, Clare and Limerick in hurling.”

Marty: “On a global scale, there is Muhammad Ali and Joe Frazier, John McEnroe and Bjorn Borg, Manchester United and Manchester City, but nothing quite compares to Cork and Tipperary!”

Michael: [Lifts mic, pauses.] “Well Marty, that was some build-up!”

It was too. Alas, the match didn’t live up to the billing, Tipp prevailing comfortably, and you can only hope events in Stade Jean Bouin don’t give the GAA any ideas about a third-place play-off. Cork and Limerick: “On yer bike.”

Scholesie meant no offence, but he tipped Swansea for relegation, so come full-time when they’d beaten United, he wore an expression that suggested he now reckoned it’d be Louis van Gaal sitting in the away dugout at Rotherham in 12 months’ time.

On to Match of the Day and that theme music filling your sitting room makes you realise life has a sporting purpose again.

“And it’s 50 not out for MOTD,” said Gary Lineker, who was three-ish when it all kicked off, the first game ever shown Liverpool v Arsenal at Anfield. According to Wikipedia, “the programme’s audience was estimated at only 20,000, less than half of the attendance at the ground”, and the current MOTD audience threatened to drop that low if they didn’t hire themselves some shiny new pundits.

Ruud Gullit filled the retired Alan Hansen’s seat on Saturday and educated us on Louis’s tactics at AZ Alkmaar and the like back (something like 3-1-2-1-6-8-2) when Nani was just a twinkle in his eye. Alan Shearer, still filling Alan Shearer’s seat, insisted United needed to buy “three world class players”.

Three? Ruud’s shrug suggested he thought the need was more like 11, although back on BT Sport earlier Scholesie had suggested there was one current United player who belonged in the club’s all-time XI. Darren Fletcher.

That almost had Steve McManaman spitting out his teeth, which might have been Wayne Rooney’s response too.

Richard Keogh has joined Huddersfield until the end of the season 13:25
Jordan Henderson takes up ambassadorial role in support of NHS 13:05
Mason Jones not interested in being the Welsh Conor McGregor 12:01
Charles Byrnes’ licence withdrawn after runner ‘nobbled’ with a sedative 12:52
JP McManus Pro-Am deferred for a year due to Covid 10:45