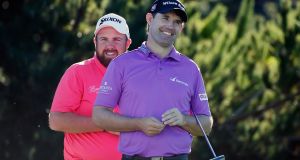 Back in August Lowry won his first event in the US when he captured the Bridgestone Invitational in dramatic fashion to become just the third Irishman to win a World Golf Championship.

The win earned him a three-year exemption onto the PGA Tour, a ticket to next year’s US Masters and moved him into the world’s top 20. In short, it catapulted him onto the world stage.

The Offaly golfer was presented with the award by host Pádraig Harrington who himself received an award for his tense playoff win at the Honda Classic in March – his first PGA Tour win since 2008.

Michael Conlan’s heroics in Doha, which saw him win Ireland’s first-ever gold medal at the men’s World Boxing Championships, were rewarded with an outstanding achievement award.

AP McCoy, who this year retired after riding 4,358 winners and being named champion jockey 20 years in a row, also received a lifetime achievement award.

With the 25th anniversary of Italia ’90 being remembered during the summer, the Irish team from that World Cup won the Reeling Back the Years Award.

The awards are held in aid of the Irish Youth Foundation, which supports vulnerable children and young people living in disadvantaged circumstances around the country.

Host Pádraig Harrington received a surprise award on the evening for his dramatic victory at the Honda Classic in March after a tense play-off with American rookie Daniel Berger.

1 Ken Early: Like Napoleon, Mourinho is the outsider always trying to prove himself
2 How Dundalk’s opponents Sheriff started on wrong side of the law
3 Gordon D’Arcy: Losing such a big game shines a very harsh light on certain players
4 Fearing players wouldn’t listen, La Liga appealed to their kids
5 Seán Moran: Fallout from Tyrone final celebrations will concern GAA
Real news has value SUBSCRIBE
Here is your handy guide to sport on television this week