Liverpool are the Premier League champions; Andrew Porter on Leinster’s first week back

Thirty years of hurt came to an end for Liverpool when they were confirmed as Premier League champions courtesy of second-placed Manchester City's 2-1 defeat by Chelsea. Video: Reuters 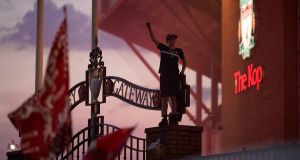 And so it has come to pass. After a 30-year wait which, at times, looked like would never end, Liverpool have won the English top flight title and will lift the Premier League trophy for the first ever time. It’s a league title in the strangest of circumstances – sealed by a Chelsea win over Manchester City at an empty Stamford Bridge – but that won’t matter to Liverpool fans who have waited so long for this day. Reacting to the news last night, manager Jürgen Klopp said “it’s the best thing I can imagine and more than I could have ever dreamed of.” And while it may not feel like a normal title win with a full stadium and open-top bus parade, there can be no mistake made about it that Liverpool were the best team in the Premier League by a long, long way this season. As Barney Ronay writes: “Liverpool didn’t just outrun the rest of the field. From late summer into spring they seemed to be operating to a different set of physical laws.” Photos from overnight show thousands of Liverpool fans celebrating outside Anfield and, while it may be hard to blame them, police have condemned the flouting of social distancing guidelines and asked fans to celebrate responsibly.

It was the year 1990 when Liverpool last became champions of England and just a few short months later Italia 90 would take centre stage and one of Ireland’s greatest ever summers was in full swing. In our series this morning Keith Duggan writes that, in the current strange circumstances, we could all do with a dose of that Italia 90 feeling. “Nessun Dorma and all that. And it felt like a dream. Ireland had the tingles: the country couldn’t quite get over itself. This summer also feels like a dream – albeit one you might have if you accidently swallowed a few horse tranquilisers,” he writes. The photos from the time will be looked back on for decades to come and and this morning Inpho photographer Billy Stickland has picked out his seven favourites from the tournament, telling Malachy Clerkin just why they are so special to him. In other, somewhat different, domestic soccer news, the FAI announced last night that a report into its finances has been referred to the Garda and ODCE. Among the transactions looked into were a number of payments to Delaney’s former partner, Susan Keegan, who now lives in Spain where she runs a gym. Keegan is believed to have been listed in the FAI’s accounts as having received around €95,000 in various sums from the association.