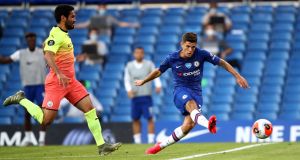 In the end, perhaps it was strangely fitting that Liverpool’s moment of triumph should be met by pure silence. Perhaps a moment on this scale deserved a little pause for thought. Time for the sheer disorienting scale of the achievement to sink in. Time to reflect on the extreme weirdness of the circumstances in which it was achieved: 200 miles from Anfield, with none of the protagonists present.

But history will not recall the fact that their first league title since 1990 was not sealed on their own turf in the Anfield springtime, but on a baking summer’s night in west London. What it will recall is the scintillating, stupefying brilliance of Jürgen Klopp’s side from front to back. It will, just about, remember the party afterwards. Yes, it turns out a title shorn of all the usual trimmings – players on the field, a crowd in the stadium, a parade on the streets, hugs and high-fives all round – still feels just as sweet.

And so it was with a certain doomed futility that at 8.15pm, Stuart Attwell blew the whistle and City’s tropical-yellow shirts set about trying to push back the hurricane with their bare hands. Not, you suspect, that mathematics would have been foremost in their minds. Guardiola teams have rarely been motivated by the tangible. Winning for trophies? Winning for points? No, you win because it’s your job, and you’ve seen the look on Pep’s face when you don’t do it.

They had picked a near full-strength side to do so, with Bernardo Silva slotting seamlessly into a front three in the absence of Sergio Agüero, and an agreeable tempo being set by Rodri and Kevin De Bruyne in the centre.

Chelsea, meanwhile, settled in for the long haul. Resisting City is as much a test of nerve as technique: let them pin you back in your own third, and it might be 10 minutes before they let you out again. But their only real chances came from a Riyad Mahrez interception and a Fernandinho header: the first gifted by a slack Kepa Arrizabalaga clearance, the second brilliantly saved by him. Have three minutes ever encapsulated Arrizabalaga better?

Yet for all City’s possession and territory, Chelsea largely held out for the first half-hour. Mason Mount seemed to be everywhere. Andreas Christensen looked comfortable. And every so often, something strange would happen: Chelsea would somehow finagle the ball up the field and fashion a decent opening. Ilkay Gündogan was forced into a desperate clearance. Ederson saved brilliantly from Christensen. That seemed to flick a switch in Chelsea: the moment they sprang from their traps, and realised the game was there for the seizing.

Even so, as Antonio Rüdiger headed away a City corner on 35 minutes, little immediate danger portended itself. But as Gündogan and Benjamin Mendy casually left the ball for each other, Pulisic stole in and claimed it for his own. Still Mendy still seemed not to grasp the seriousness of the situation, even as Pulisic turned him inside out and galloped on.

Now Mendy was truly lost: a bystander, powerless to stop Pulisic placing a low shot past Ederson, before reeling towards the corner flag with an effusion of four-letter words. Jubilant team-mates pursued him: “Brilliant, mate!” shouted Olivier Giroud in what appeared to be a perfect Cockney accent. On the touchline, Frank Lampard urged calm. “We go again,” he said.

And they did, but so did City. Stung into action, they poured forward in numbers, although not always with the greatest poise. Bernardo and Rodri made way for Gabriel Jesus and David Silva. Mendy, seeking instant expiation, smashed a shot into the top tier of the Shed.

It took De Bruyne, with the help of a needless foul from N’Golo Kanté, to restore a little sanity to proceedings as only he knows how. There was an insouciance, even an indifference, to the way he stepped up from 25 yards and simply pinged the ball into the top corner, as if it were easier to score than miss. The first man on the scene to congratulate him – or perhaps thank him – was Mendy.

Finally, the dramatic flourish: a goalmouth scramble ending with Fernandinho twice clearing off the line from substitute Tammy Abraham. The second time, fatally, with his hand. A red card for Fernandinho, a fine penalty by Willian, and a party three decades in the making could finally begin in earnest. – Guardian

1 Tipping Point: DeChambeau’s transformation raises questions, but who will ask them?
2 Monica Seles: The warrior queen who could have been the best ever
3 Patrick Mahomes reported to have signed 10-year $400m deal with Chiefs
4 Mental clarity in chaos: Novak Djokovic, the man who turned two into three
5 Rory McIlroy's hot and cold putting still his nemesis
Real news has value SUBSCRIBE