Although home side’s defence looks vulnerable, their modified attack should do enough 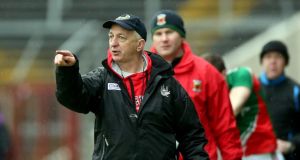 Conor Counihan has taken the chance and experimented with his Cork side this year. Photograph: Inpho

There’s been a bit of a festival feel about the championship already, and even if these two old-timers have been shunted off the main stage in favour of the two headline acts happening elsewhere in hurling – and they wouldn’t have done that to The Rolling Stones – there’s still good reason to be in Killarney tomorrow afternoon.

Just forget about getting a place to stay. Every hotel and B&B has been booked out for weeks, although not exactly on the back of the 69th Munster football final meeting between these teams. It’s actually explained by the Ring of Kerry cycle, taking place today, luckily, with 8,500 signed up, and another 1,000 on the waiting list.

Still, the sun will be shining, Killarney will be buzzing, and the advice for anyone attending is to come early as Kerry also feature in the minor final.

As for the main event all the pre-game talk has surrounded Kerry’s dropping of Kieran Donaghy in favour of Darran O’Sullivan. As surprising as that was ,it’s quite easily explained by the desire, and indeed need, to try something different. Donaghy is always a threat, but had become a predictable one, while the pace and agility of O’Sullivan, alongside Declan O’Sullivan and James O’Donoghue, should make things a bit more interesting.

With Colm “Gooch” Cooper now well settled in his new role at centre-forward there is a more three-dimensional look about the Kerry forwards, rather than just the one. Paul Galvin might have lost some of his pace, yet his vision remains sharp and indeed all six of Kerry’s starting forwards are highly capable of scoring.

The Killarney factor is important too: everyone in Kerry says it, that the team don’t like losing there, and they have the record to prove it. Their victory there over Waterford in the semi-final increased to 22 their number of unbeaten games in Fitzgerald Stadium.

Kerry’s form has been impressive too, from the last round of the league against Tyrone, and against both Tipperary and Waterford – although scoring a combined total of 43 points more than those last two also shows they haven’t been nearly properly tested yet.

Counihan has stuck with that same team, although unlike Kerry manager Eamonn Fitzmaurice, won’t feel obliged to actually start with it. Counihan made a couple of late changes before the throw-in against both Limerick and Clare, and indeed Cork have only fielded their named team once in championship since the 2011 Munster football final.

There will be the obvious temptation to start the likes of Aidan Walsh, Ciarán Sheehan and Donncha O’Connor, although they will certainly see some action anyway – all three were introduced within the hour against Clare. Cork kicked 1-20 that day, at their ease, but will need to hit Kerry a lot more where it hurts, in terms of goals, if they’re to win this one.

There is a slightly vulnerable look about the Kerry defence, newcomer Mark Griffin providing some cover for the injured Aidan O’Mahony, although Shane Enright returns. But ultimately Kerry’s slightly modified attack has a more dangerous look about it, and with back up men like Bryan Sheehan, Kieran O’Leary, and that man Donaghy, it’s hard to see Cork holding them all out sufficiently for the full 70 minutes.