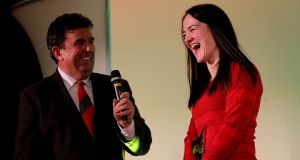 World champion boxer Kellie Harrington has been crowned The Irish Times/Sport Ireland Sportswoman of the Year for 2018.

The 29-year-old Dubliner’s lightweight division victory at the world championships in India last month, made her the first Irish boxer to win world medals in two different weight categories.

She is also just the third Irish boxer - after Katie Taylor and Michael Conlan - to become an amateur world boxing champion.

Along with her former Irish team-mate Katie Taylor, Sanita Puspure in rowing and cycling’s Katie-Georg Dunlevy and Eve McCrystal, Harrington is the fourth monthly winner in 2018 to have been crowned a world champion.

During a gruelling week, Harrington beat boxers from New Zealand, India, Canada and Kazakhstan, before getting the better of Thailand’s Sudaporn Seesondee on a split decision in the final.

Two years ago, Harrington won silver at the World’s in the light welterweight and vowed she would return to take gold. “Thirteen years of blood, sweat and tears... It’s great to finally get what I worked my ass off for” she said.

At a triumphant homecoming event on Sean McDermott Street, Harrington, who’s from nearby Portland Row, described how boxing had helped her.

“I got into boxing to keep me out of trouble, to go down a different path. You can choose roads to go down, I was on one road, I took a turn and got onto the right road and this is where I am today. And trust me, if I can do it anybody can do it.…To finally reach my goal is amazing, but I’m not hanging up my gloves yet. I have Tokyo in my sights”.

Olympic silver medallist Annalise Murphy, who was The Irish Times Sport Ireland Sportswoman of the Year two years ago, was on hand to present Harrington with the award. This is the 15th year of the awards and the boxer was among 15 monthly award winners – there were multiple winners on several occasions - nominated for the 2018 title.

The Irish women’s hockey team, which claimed a silver medal at the hockey World Cup in London in August, was presented with the Outstanding Contribution to Sport 2018 Award.

Despite being the only amateur team at the event - and the second lowest seeds - the Irish team surpassed all expectations by getting to the final, the first Irish team to get to a senior world final in any field sport.

They topped their group before beating India in the quarter final and Spain in the semi-final, both after penalty shoot outs. The team received a heroes’ welcome when they returned home on August 6th. Ayeisha McFerran, who was named goalkeeper of the tournament, was the Irish Times Sport Ireland Sportswoman of the Month for July. Last weekend the team was named the RTE Sports Team of the Year following a public vote.

Sports Editor of The Irish Times Malachy Logan described 2018 as a momentous year for Irish sportswomen. “World and European championships medals have become almost the norm across a huge variety of sports at these Awards while, at home, our GAA, soccer and horse racing stars are equally celebrated for their enormous contribution to women’s sport. None of this would have been possible without the skill, dedication and training of the women we are honouring today as well as the unswerving support of their coaches, families and partners. It is only fitting, therefore, that we are today saluting those achievements.”

The Minister for Transport, Tourism and Sport Shane Ross said: “2018 has been another year of success for Ireland’s sportswomen, who have given us many wonderful memories and produced some spectacular performances which have captured the imagination of the country. Their continued success serves to inspire our children and young people and to enhance Ireland’s reputation abroad. I would like to acknowledge Sport Ireland and the Irish Times for staging these awards which recognise the incredible contribution of Irish women in sport. I would like to congratulate all of today’s winners and also pay tribute to their families and all of the coaches and support teams who have helped them to reach the highest levels of sport.”

The Chairman of Sport Ireland Kieran Mulvey said: “In sporting terms 2018 has been a spectacular year. Sport has a unique ability to unite people of all backgrounds and we have had no shortage of sporting success to celebrate in the past twelve months. We are all united in our pride for the achievements of our athletes and teams on their success this year. The Irish Times/Sport Ireland Sportswoman of the Year awards is the perfect way to round-off an excellent year and a fitting way to celebrate our wonderful athletes. I congratulate each of the monthly award winners on their achievements and wish them well for the year ahead.”

1 Dan Leavy gets back in the thick of things as Leinster trounce Zebre
2 Mike Catt wary of young Italians and excited by Irish debutants
3 Colin Byrne: Hard to understand how golf has become the bogey man now
4 Six Nations - Ireland v Italy: Kick-off time, TV details, team news, standings and more
5 Irish duo set for AFL Grand Final as sport lifts the gloom Down Under
Real news has value SUBSCRIBE
Here is your handy guide to sport on television this week