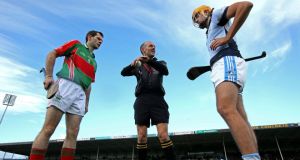 As Irish summers go, the one just past beats most. It had a mid-1990s feel to it. The glorious weather, the scalded brows, the succession of championship upsets, the toppling of provincial traditions and the chiselling of unfamiliar names onto coveted silverware.

For hurling nostalgists especially, the drama and excitement of the championship was like rewinding the clock to what Denis Walsh, in his wonderful chronicle of a decade of sporting upheaval, quite aptly described as hurling’s Revolution Years.

But, of course, the 1990s were revolutionary for reasons other than the reordering of hurling hierarchies.

Developments off the field then were as ground-breaking as those on it. This was the decade, remember, when the GAA, as if in a hurry, would jettison one long-standing principle after another. Most notably, perhaps, rules on sponsorship were relaxed and championship formats, once seen as sacrosanct, were overhauled to provide for more games for more counties in the fine summer months.

Any serious assessment of these innovations can only conclude that they have been hugely successful. Helped until recent years by a favourable economic tailwind, the expansion of the All-Ireland championship with the introduction of the unwieldy qualifier system brought more inter-county action and greater media exposure. And, of course, more games meant more revenue.

And more revenue for an organisation as admirably redistributive as the GAA meant more money to filter down to grassroots programmes and local infrastructural projects.

But the legacy hasn’t been entirely benign.

Actions often have unintended consequences and before the 1990s were out, it was clear that the transformation of the inter-county scene brought with it collateral damage.

As early as 1999, a report from a Football Development Committee decried the negative impact the new inter-county structure was having on club fixtures in many counties. It baldy stated that a “tiny’ number of inter-county players were effectively depriving a huge number of club players of a regular programme of games”.

A problem
It might be expected that such a problem, once identified, would be addressed, that remedies might be sought. They haven’t. Not yet anyway. Not seriously.

The harsh truth remains that the plight of the adult club player is, in many counties, nothing short of dismal. And it is contributing to a widespread disenchantment.

In 2012, more than 1000 players took time to complete a questionnaire as part of the work undertaken by the Eugene McGee-chaired Football Review Committee (FRC). The findings, if unsurprising, were alarming.

Fifty-two per cent described adult fixture-making in their county as poor or very poor. More than that stated that was not enough competitive club games, while 64 per cent complained t the club season was ‘too long and drawn out’.

We are not talking here about a mere rump of the GAA’s playing membership. Ninety-eight per cent of all players are involved exclusively at club level and they are surely entitled to the same consideration as their inter-county counterparts.

In the normal run of things this is the sort of issue that might interest a players’ representative body, particularly one that is well-funded from central GAA coffers. Unfortunately, the Gaelic Players Association revels too much in its own exclusivity to care much for the real welfare concerns of the majority of hurlers and footballers.

And what we are talking about is genuinely a matter of player welfare, respect even. In late 2009, a player from the Duleek-Bellewstown club in Meath, Tony Cunningham conducted an online survey of club players’ experiences and presented the results to his county board. What it revealed was the extent to which poor planning of fixtures impacted on the sporting lives of club players, as well as on their wider social and private lives.

It wasn’t so much the volume of games that was the problem; it was how they were organised and when they were played.

Players were treated like they had no lives outside sport. No jobs, no families, no other social commitments or interests. Respondents noted how games were run-off at short notice – often within the week – and how long bouts of inactivity were followed by sudden, intensive flurries of fixtures.

“Why are there fixtures in December but a huge gap in the summer?” one of them remarked. Why indeed?

The biggest cause of the drag in the club season is undoubtedly the excessive deference shown by county boards to their own county managers, their willingness to subordinate all other priorities to the perceived interests of the county team. In most counties by now, the writ of the inter-county manager runs. What they want, they get. You can hardly blame them, of course. Inter-county managers want the best for their teams, will be criticised for underperformance, so why not, if allowed, set aside the club calendar to facilitate full, access to their chosen players.

The pity is that many county boards buy too willingly into the simplistic equating of the health of a game with the fortunes of a county team. The pity is that the provision of a meaningful schedule of games for club players is seen increasingly as contrary to the interests of the county.

One can’t compliment the other, it seems. Jim McGuinness implied as much when making it a precondition for his continuation in the Donegal management role that all Donegal senior and intermediate championship matches be deferred until the county team exit the championship.

Minor hurling
And so the denigration of club activity continues unchecked.

Worryingly, the trend is even spreading into the underage ranks – as a consequence of Dublin minor hurling and football teams reaching two All-Ireland finals last year, for instance, one premier minor league competition was not completed until April this year. Crazy stuff.

For the GAA, the problem is now such that it threatens to undermine other substantial achievements. For all the effectiveness of the Association in introducing children to its games at a very young age and bringing them through the underage grades, it appears clear that concern with the quality of the player experience lapses as soon as they reach adulthood. At the very time when player retention become most problematic, when young men are free to make choices for themselves about how to spend their hours of leisure, the GAA makes it easier for them to walk away.

So is this really as good as it gets for the club player? Perhaps not: hopes for a coherent, national approach on the issue currently rest with the aforementioned FRC. Having successfully steered some of its recommendations on rule changes through Congress this year, the committee will have to do it all again when they issue a second report on competition structures early next year. They have their work cut out.

Given the issues of dual players and player eligibility for multiple teams, there is no ideal or perfect solution. But what is certainly required is a rebalancing of the relationship between club and county teams (and, while we’re at it, between club and college teams). With that as a guiding principle, any change that results will surely be change for the better.

Mark Duncan is a historian and founder of the InQuest Research Group. His books include The GAA: A People’s History and The GAA: County by County (with Mike Cronin & Paul Rouse)

1 Shels chairman Andrew Doyle hits out at ‘appalling’ FAI governance
2 Heroic insanity: When Michael Dunlop raced home in memory of his father
3 Players focus more on life outside game due to lockdown, says GPA
4 Rams pip Chiefs in third-highest scoring game in NFL history
5 Perec has to retire as injury persists
Real news has value SUBSCRIBE
Here is your handy guide to sport on television this week