Ireland hit with a club versus country crux 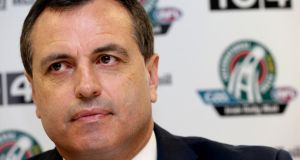 No representatives from counties such as Kerry, Down, or indeed Cavan, hosts for the first Test, and no more than eight survivors from the last International Rules panel, but widespread club-versus-country dilemmas, coupled with fairly extensive injuries, meant Irish manager Paul Earley was always going to be compromised with his selection of players to face Australia.

Indeed it’s still not clear what exact role Irish captain Michael Murphy will play in the first Test on Saturday week, October 19th, as the Donegal county board announced last night they will not be switching the date of the club county final where Murphy’s Glenswilly club are set to face Killybegs. The game will go ahead as scheduled on the 20th.

Others effectively missing out completely due to club-versus-country dilemmas are Carlow’s Brendan Murphy, who this Sunday will captain his club, Rathvilly, in their county final, with the potential for further club commitments to come, and also Dublin’s James McCarthy, who had been called into Earley’s training panel after winning the All-Ireland with his county, but has decided instead to concentrate on his club, Ballymun Kickhams, now through to the quarter-finals of the Dublin county championship.

Due to injury
Among those known to have missed out due to injury too is Down’s Kevin McKernan, despite featuring prominently in recent Irish training sessions: however, the Irish medical team advised Earley that bruising to McKernan’s knee was likely to be exacerbated by training for both his club and the Irish team. Kerry forward Darran O’Sullivan, also identified for potential inclusion, was another casualty of injury, while Kerry team-mates Colm Cooper and Kieran Donaghy also opted out due to club commitments, with Cooper’s Dr Crokes and Donaghy’s Austin Stacks actually progressing to the county final on Sunday week. Against that backdrop there is no Kerry representation whatsoever.

What is certain is that the 29-man panel which Earley named yesterday will be reduced by six, to 23 players, after this weekend’s practice match in Cavan, ahead of the opening Test at Kingspan Breffni Park in Cavan on Saturday week – with the second Test for Croke Park the following Saturday evening (both games throw-in at 7pm).

For now, 15 counties are represented, with beaten All-Ireland finalists Mayo having the largest single representation on the panel with four, followed by Cork, Donegal, Laois and Dublin, who all have three each. Cork’s Aidan Walsh has been named as vice-captain.