Unbeaten 99 from Joyce the highlight of strong batting display 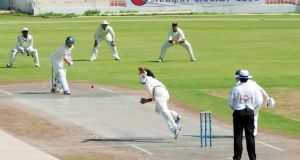 Ireland made the perfect start to their season in Sharjah yesterday as they dominated the opening day of their Intercontinental Cup clash with the United Arab Emirates, reaching 272 for two at stumps.

Although next week’s World Cup qualifiers are the main business of the trip to the gulf, Ireland are also keen to keep up their impressive lead at the top of the table in the first-class competition.

And having been put in to bat by their hosts, they sent out a strong on a Sharjah track set up for the UAE’s spin-heavy attack.

An opening stand of 126 brought Ireland into the second session before Paul Stirling departed for 61.

That brought Ed Joyce to the wicket and the Sussex captain injected some momentum to the scoring in a 162-run stand with William Porterfield, who made 82 before departing in the final session.

Joyce and Niall O’Brien (24 not out) added 85 before play ended, with Joyce finishing unbeaten on 99 overnight, one short of a maiden first-class century for Ireland.

It happens also be his second century for Ireland against the UAE after his great effort in the World Cup qualifier at Stormont back 2005.

Joyce admitted that there are no real demons in the pitch, meaning Ireland will look to post a first-innings total somewhere north of 500 before their bowling attack, including Tim Murtagh making his first-class debut for Ireland, go about claiming 20 wickets.

“It could be a blessing in disguise that we were actually put in,” said Ireland captain Porterfield.

“We’ve got to make the position we’re in count. Tomorrow morning’s going to be a big session for us, but if we can set it up and be two, three down at lunchtime tomorrow, it gives us a great platform to push on.”
Emmet Riordan

French Open: Denmark’s Clara Tauson sees off seeded Jennifer Brady 18:24
Solskjaer says football is a ‘different game’ this season 17:48
Tony Mullins eyes Group One glory in Paris with Princess Zoe 17:48
Conor Murray expected to be fit for Ireland’s clash with Italy 16:38
Will Addison set for long recovery after back surgery 16:15