Tipping Point: McIlvanney's writing will live on - because nobody did it better 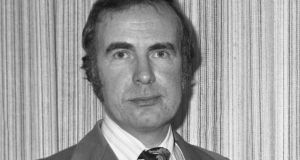 In his introduction to “McIlvanny On Boxing”, the sports writer gave an insight into his modus operandi when it came to Muhammad Ali – not to mention the advantages he had as a Sunday writer. He died aged 84 last Thursday. File photograph: PA Wire

We are a self-important people, sportswriters. Like, even just read that sentence back. You’d be hard pressed to start a Monday morning with much more pomposity than that. A self-important people? Pretty big talk for a breed whose dignity has been rarely known to survive the appearance of a tray of free sandwiches.

Anyway, we are. Occasionally, we tend to imagine a certain romance attached to what we do, sitting in empty stadiums as the snow globe settles around whatever event just happened, heroically explaining to people what it was that they saw. As if (a) they can’t work it out for themselves, (b) every TV pundit, radio expert and podcast jockey hasn’t already done so by the time the paper hits the streets and (c) ours is the voice everyone has deemed worth waiting for.

It’s an obvious nonsense, now more than ever. But we beat on, boats against the current. (Self-importance never precludes stealing from the greats. Practically insists on it, indeed.)

If you’re lucky, you discover quickly how small your place in the world is. It’s best to learn as early as possible that your chosen way of life might not carry quite the weight or sheen of legend you’ve bolted on to it. Years ago, on a weekend home from college, I remember waxing over a scatter of pints with a few former schoolmates about this sportswriter Hugh McIlvanney who I’d just discovered.

I’d come across the book McIlvanney On Football in a second-hand shop somewhere and was raving about his pieces on Maradona and Best and Shankly and Stein and the rest. The lads were football fans and reliably bookish too when the mood took them. We were 19, though, and it was a Friday night and my level of enthusiasm for this sportswriting god and the uncommon clip of his eloquence was distinctly unshared among the group. “Mal,” said one of them, cutting me off mid-flow. “We don’t care.”

I often thought about it afterwards. He was right, of course, in shutting the subject down. There is surely nothing more tedious than having to listen to someone babble on about the genius of something or someone you’ve never heard of. Also, it was my round.

But it was a valuable reminder too of just what a niche pursuit this is. If Hugh McIlvanney couldn’t get no respect on a Friday night in a provincial town 20 years ago, who among us ever can or ever will? It’s fairly pointless getting ideas above your station when even the best of the best doesn’t ring any bells among the general populace. No harm knowing that when you’re young enough to convince yourself it’s the life of kings.

That said, one of the effects of taking the McIlvanney collections down from the shelves over the weekend – he died last Thursday – and leafing through them was to be transported back to a time when that self-importance might not have been quite such a ludicrous conceit. Although in fairness, it helps to be Hugh McIlvanney.

Rumble in the Jungle

Imagine being an Observer reader in 1974, as the Rumble in the Jungle took place in far-off, unknowable Zaire on a Tuesday night/Wednesday morning. Imagine picking up the paper that Sunday and finding McIlvanney’s legendary account, running to just over 2,500 words, including what amounted to a private audience with a stilled, pensive Ali the day after the fight? You could credibly think you were reading nothing less than the most vital writer in the language just at that moment.

In his introduction to McIlvanny On Boxing, he gave an insight into his modus operandi when it came to Ali – not to mention the advantages he had as a Sunday writer. “With him, the short sharp interview rarely elicited anything but a stage turn, a revamping of material that might or might not be entertaining but almost certainly had been heard before.

“By far the best bet was to try to merge with his life for a day or two or at least several hours at a stretch, simply to hang around as unobtrusively as possible, eavesdropping on the strange meanderings of his spirit and just occasionally tossing in a few questions when he seemed susceptible to being nudged in directions that suited the eavesdropper.

“Anyone who took that approach would still have to suffer may of the old vaudeville number, maybe a couple of brain numbing Black Muslim lectures and a little ritual boasting, but unless he was very unlucky there would be something worthwhile among the dross.”

Of course, any of us reading that now can have but one response. Good for you, Hughie – but the Derry hurlers had a media ban last week so what are we supposed to do with that? And as for merging with his life for a day or two – will we be live-tweeting that throughout? Or waiting until the end to podcast it?

Times change, mores change, the game changes. People don’t write about sport the way McIlvanney did any more. Pieces are shorter now; sentences are shorter, for that matter. Sunday papers are on borrowed time as stand-alone concerns and the luxury of heading off to hang around a sportsperson or team or event for a week is afforded to almost nobody. It’s a mode of sports journalism that is all but extinct apart from very rare exceptions.

But when it existed, nobody did it better than Hugh McIlvanney. In his shadow, every sportswriter’s sense of self-importance is reduced to an ever-more laughable notion.