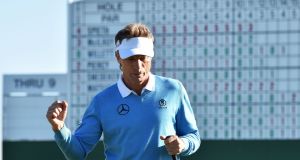 Bernhard Langer heads into the final round of the US Masters firmly in contention. Photograph: AFP

Where would you find the likes of it? After all, could you imagine a 58-year-old getting down on his hunkers to take on Usain Bolt? Or, someone, approaching their seventh decade on earth, counter-volleying Novak Djokovic? In your dreams, perhaps; but, on the golf course, the ultimate arena for mental fortitude, longevity isn’t a milestone.

Bernhard Langer’s exploits in this 80th edition of the US Masters - the German’s 33rd appearance in the tournament - were remarkable, for a number of reasons.

Firstly, his age; he’s old: even if his trim, fit body is the product of a life spent watching the menu and working on his fitness. Secondly, his putter; that he still uses a broomhandle putter, even if it is pushed away from the body so that it is not anchored. It looks clumsy and uncomfortable, but the it worked wonders when it came to getting the ball in the hole. Maybe Ernie Els will try it.

Heck, does it work! For Herr Langer.

“I wasn’t alive when he played here. I’m proud. It’s golf, and anything can happen.” Those words came from Langer’s son, Jason, on Saturday evening. His father - winner of green jackets in 1985 and 1995, a time when European ruled the roost in the tournament - had rolled back the years with a third round 70 to muscle his way into the penultimate pairing of Sunday’s final round.

Langer’s caddie, Terry Holt, was asked what had gone so right. “Everything,” he replied.

For a player who only occasionally returns to the main tour, where young guns in their 20s dominate the Majors, Langer’s audacity - just as Tom Watson’s near-miracle when bringing his quest for a claret jug all the way to a play-off at Turnberry in 2009 before losing to Stewart Cink - was outrageous and inspiring.

And all the more so given the 21 years gap since he last walked these fairways as a champion. After all, his second green jacket in 1995 came before the course was Tiger-proofed. This course is a different animal now to then. And yet, even though up to 50 yards behind his fellow competitors, Langer, as he does, found a way. He outscored Jason Day, the world number one, on Saturday. “The scorecard doesn’t always show that (difference in length),” he remarked, dryly.

Speaking on the “Golf Channel” on Saturday night, Colin Montgomerie talked, almost wistfully, about Langer’s continued competitiveness which has been honed on the Champions Tour. There, he has won 26 times, most recently in the Chubb Classic. In five appearances this season, he has finished in the top-10 each time.

Yet, this throwback was unexpected for all that. He had missed the cut in seven of his last nine Masters outings, prior to his rejuvenation in this, his 33rd Masters. He was ranked 1,080th in the official world rankings beforehand. He was generally on offer at 500/1. He busted all those numbers, made a nonsense of them.

How? In golf, as Langer pointed out, it’s different. “We’re not playing tennis or soccer where it comes down to speed and strength. Golf is a lot more about knowing yourself and technique, (about) thinking your way around the course and then execution. I’m probably 40, 50 yards behind some of these big hitters . . . . that’s a lot to give up. But there’s still other ways of doing it. If you hit it exactly where you want to hit it, you can still shoot under par.”

In many ways, Langer - as he has had to do through the years with his various afflictions of the dreaded yips with putter in hand - has had to find a solution to getting the ball into the hole. Once upon a time, it was in switching to a broomhandle. It was his salvation.

Now, with the ban on anchoring, he has had to readjust again.

Unlike some, like Adam Scott, who reverted to the short putter, Langer has stuck with the long putter. He just doesn’t anchor it. “Most of us don’t really understand why they banned it. If it was that much of an advantage, everyone would have used the anchoring style of putting and only 10 to 15 percent of golfers did. So there’s still a huge question mark for many people.”

The R&A and the USGA did ban it. And Langer, as he has through his career, found a way. “I’ve tried all sorts of putters. Different lengths. Different grips. I probably have 20, 25, 30 new putters at home the last three months with different grips. I’d try it this way, that way. Regular grip, cross-handed. At this moment in time, I’m most comfortable by just not anchoring.”

And for someone whose fallibility has been with the putter in hand, Langer is a contradiction. He actually loves the greens here, when the speed runs up to 14 on the stimpmetre. “I enjoy fast greens. I love fast greens. I don’t like hitting the putt when they are slow. You almost have to turn your hips and shoulders to get there. I enjoy striking the ball.”

An inspiration, for sure.