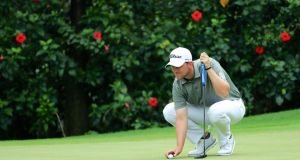 Bernd Wiesberger saw off Tommy Fleetwood in a play-off to take the Shenzhen International. Photograph: STR/AFP

Bernd Wiesberger was crowned the Shenzhen International champion after beating Tommy Fleetwood in a dramatic play-off at Genzon Golf Club.

The Austrian was in control heading into the final day in China, holding a three-shot lead, but could not have envisaged the kind of performance Fleetwood was to produce.

The Englishman, eight shots behind at the start of his final round, carded an excellent 63 to level with Wiesberger, who could only par the 18th, on 16 under to ensure another trip to the last hole in the rain.

But Wiesberger held his nerve to secure a fourth European Tour victory in his 200th event, putting for birdie despite ending up in the bank after opting to take the risky line over the water off the tee.

Meanwhile Paul Dunne signed off with his third 70 of the week, leaving him on six under par for the tournament and with a share of 33rd place.

The play-off victory was the first for in-form Wiesberger, who has not missed a cut since the US PGA Championship, in four attempts.

He told Sky Sports: “I knew it was going to be hard, I knew I would have to shoot well under par to make it outright because the guys behind were all really playing well.

“I just wanted to get off to a good start and show them that I’m up for it and I did, scrapped around a little bit, had a couple of near misses with good looks at it early on. It could have got to me but I stayed calm, played on decently.

“I had a big save on 12 there, a big one on 17 and I’m feeling a bit relieved now I have to say. I’ve had a stretch of really good events the last couple of months and it’s really nice to have a trophy again.

“We have really good players out here, all up for it, playing well and throwing a lot at me. At the end of the day I’m just glad I got myself into the spot where I could play for the title. Tommy has had a great day today and I’m just grateful to make that one shot when I needed to.”

Frenchman Gregory Bourdy and England’s Ross Fisher finished one shot behind the co-leaders on 15 under, one ahead of Fabrizio Zanotti, David Lipsky and Dylan Frittelli.